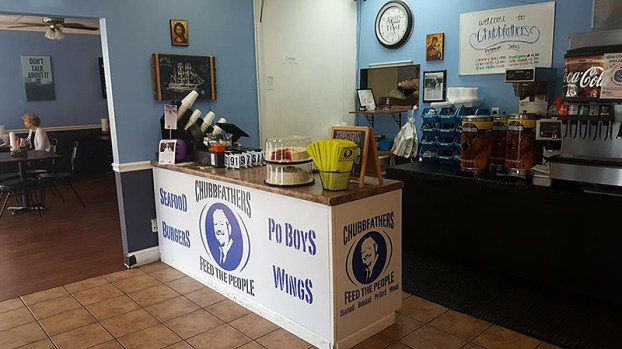 Alabaster’s Chubbfathers restaurant has been named the best burger restaurant in Alabama, and one of the top in the country, by the Big 7 Travel website. (Contributed)

ALABASTER – Alabaster restaurant owner Will Cholewinski has a simple goal for those who visit his restaurant Chubb Fathers: Enjoy the food and leave full.

“I understand how hard people work for their money,” Cholewinski said. “It is my responsibility to earn your business each and every time you walk through my door, so I want people to be satisfied with what they are getting and to leave feeling full.”

Cholewinski combined two popular restaurants Chubb’s Grub Station and Sun and C’s Seafood Spot into a single location on U.S. 31 in the summer, and named the new restaurant Chubb Fathers.

“We decided to re-brand some things,” Cholewinski said. “We have a new menu, and the response from the community so far has been great. We have really been taking advantage of using Facebook to get the word out, and folks are now figuring out we are just up the road from our former location. It was confusing at first for a lot of people because the sign at our old location said we were remodeling, but we decided not to renew our lease.”

In January, Chubb Fathers will add a breakfast menu Monday-Saturday from 6:30 to 9:30 a.m.

Cholewinski’s wife, Stephanie, will also be taking a more active role in the restaurant in the next couple of weeks, managing the restaurant’s day-to-day operations.

“God just continues to open doors for us,” Cholewinski said. “I think the food and service is better than ever.”

Cholewinski said the restaurant is working on a new website, and has seating for about 70 with roughly 40,000 cars that pass by the restaurant each day.

“We have been using Facebook lately to promote different specials that have been popular,” Cholewinski said. “The response from our Facebook posts has been really good. We have about 63 items on our new menu, with a lot more seafood offerings. We also have healthier options as well.”

Cholewinski said his family-friendly restaurant serves items that are made from scratch.

For more information about Chubb Father’s or to view a complete menu online, visit Chubbfathers.com or Chubb Fathers on Facebook.