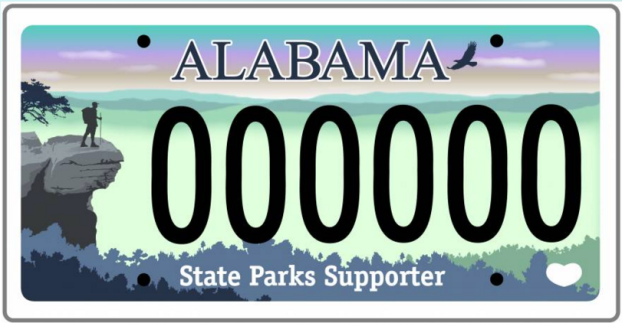 Alabama State Parks will receive 80 percent of the revenue generated from the sale of the license plates. (Contributed)

PELHAM – Beginning January 2017, Alabama residents will have an opportunity to support state parks by requesting an Alabama State Parks license plate when renewing a car tag.

The car tag is Alabama State Parks’ newest source of revenue. An artist who works at the Department of Conservation and Natural Resources created the design of the tag.

“The tag is personalized and tailored to Alabama parks,” she said.

Ezell said acquiring the tag does not cost extra money. Residents must simply request the tag.

“We don’t know how much revenue to expect since this is the first time we’ve ever done this, but Amendment 2 passed with 80 percent of the vote, so that shows us that state parks have a lot of support from Alabama residents.”

Amendment 2 ensures that funding earmarked for state parks remain in the state parks budget. The amendment prevents those funds from being deposited into the state’s general fund.

In 2011 legislation was passed that allowed Alabama lawmakers to transfer funds from the Department of Conservation and Natural Resources, under which state parks fall, and into the general fund.

Since 2012, $15 million has been transferred from the Alabama State Parks’ budget over into the state’s general fund.

Ezell said the passing of Amendment 2 has a direct effect on the revenue received from the car tags.

Because of the amendment, 80 percent of the revenue will go directly to funding state parks, Ezell said. The remaining 20 percent will go toward covering normal administrative fees. Ezell said the money will mainly go toward the maintenance and upkeep of state parks. The parks also fund conservation education initiatives.

State parks have more than 250 miles of trails located on 48,000 acres of land, according to the Alabama State Parks Partners website. State parks have an average annual budget of $37 million. Of that, $7.6 million comes from a cigarette and use tax from the state.

State parks generate $30 million to $32 million on their own every year, which is enough to properly maintain the parks.

“We can now plan to make upgrades at the parks,” Ezell said. “Prior to the passing of Amendment 2, it was difficult to plan for the future because we never knew how much money would be taken from us. We would just fix things randomly if they tore up. The passage of Amendment 2 means that the funds generated from the license plates will stay with the state parks.”

“Everything we’re able to do from here on out ties back to the passing of Amendment 2 and we are so thankful to Alabama residents for making that happen. Another way to support state parks is by visiting one. Every time you pay a park entrance fee, you’re helping.”

HOOVER – Monika Tataria opened an imaging clinic with a vision of treating women “the way they deserve to be... read more