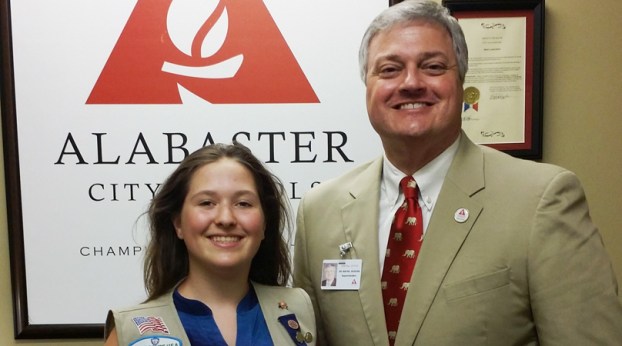 Girl Scout Senior Troop 287 member Gillian Baker was recently selected as a Council Representative and for the Girl Scouts of North-Central Alabama Council’s finance donation campaign. Baker was chosen out of all girl scouts in north and central Alabama who completed their Gold and Silver Awards in 2016.

“They picked one girl from the area whose project best exemplified the Girl Scout way,” said Gillian’s mother, Kathryn Baker. “Her project showed that Girl Scouts is about more than just cookies and badges.”

According to Troop 287 leader Beverly Edwards, Gillian completed her Silver Award last summer after she created a directory of local community service organizations that allow middle and high school students as volunteers and presented it to Alabaster City Schools Superintendent Wayne Vickers.

“This actually could have been a Gold Award project,” Baker said. “Most Silver Award projects are done in groups, but she did every element of the project by herself.”

Edwards said Gillian was inspired to create the directory after their troop faced difficulties while trying to find volunteer opportunities.

“We discovered that it was hard to find a place that would allow 11, 12 and 13-year-olds to volunteer,” said Edwards.

Edwards said Gillian gathered the information by calling and visiting local community service organizations. Gillian began planning for the project two years ago, but it only took her two months for her to complete it.

Gillian is currently a freshman at Thompson High School. In addition to her involvement in Troop 287, she is also active in the THS marching band and the THS girls’ varsity bowling team.

Baker said her daughter completed the project on top of school and all of her other extracurricular activities.

“She did this in the middle of band camp, where they will have nine or ten hour workdays. It really speaks to her dedication to getting the project done,” Baker said.

The directory is available through Alabaster City Schools. Edwards said it will soon be accessible on their website.

Both Baker and Edwards said they are proud of everything Gillian has accomplished with this project.

“Gillian is the best young lady. She’s always willing to go that extra mile to do something for someone. She’s fun-loving, very caring and compassionate,” Edwards said.

Jefferson-Shelby Classic tips off next week

By ALEC ETHEREDGE | Sports Editor Ten Shelby County basketball teams on both the girls and boys side will be... read more