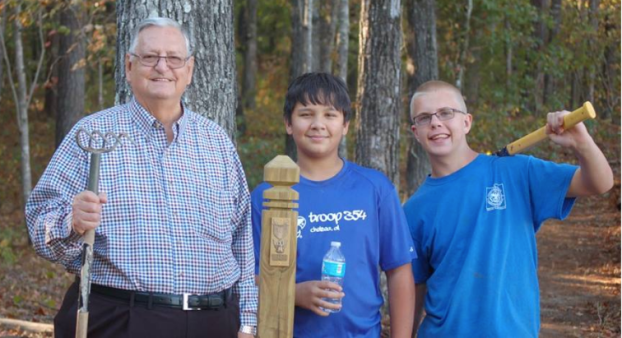 Stephen Brown created a nature trail behind the Chelsea Community Center. Cole Higdon cleaned up a pre-existing nature trail and built three benches alongside it. The benches were strategically placed to optimize the view of the trail.

Brown said he chose his project because of a personal request from former Chelsea mayor Earn Niven. Brown began working on his project in early October, and finished later that month. After the trail was built, Brown said Niven threw a social event to get Chelsea residents acquainted with it.

“Most of it was figuring out exactly where to put it,” Brown said.

The trail is marked by a post with a brass plaque and spans approximately one third of a mile. Brown also lined the trail with deadwood.

“I think it made the community center more popular. People appreciate it being there,” Brown said.

Higdon chose his project after visiting a nature trail the troop had previously created on the King’s Home campus.

”I thought that this could be a really nice trail if we had some benches out here and cleaned the trail,” Higdon said. “I thought this would make a good Eagle Scout project.”

Higdon began working on his project in September, and worked on it on top of taking AP courses and doing additional badge work. His project was completed in November.

According to Higdon, his project required a lot of geometry.

“Making three benches is a lot more difficult than it sounds,” Higdon said.

Higdon said he is proud of the work both he and Brown put forth to complete their projects.

“Stephen got his project done early, and I’m glad for him. He’s going to be able to enjoy the rest of his scouting career,” Higdon said. “I’m also very proud that I got my project done.”

Both Brown and Higdon attend Chelsea High School. Brown is a sophomore, and Higdon is a senior who plans to stay as involved as he can with Troop 354 after he graduates.

Brown and Higdon plan to celebrate their accomplishments at an Eagle Scout Awards Ceremony at Union United Methodist Church in Wilsonville in mid-February.