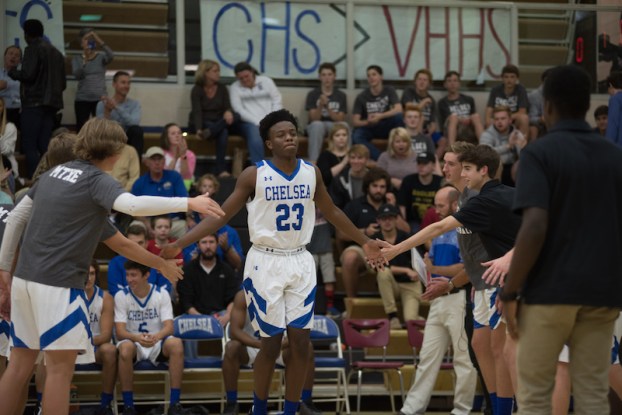 Tyler Coleman led the way for Chelsea with 11 points off the bench in a team effort for the Hornets. (File)

Mobile – After taking down host UMS-Wright in the UMS-Wright Christmas tournament on Tuesday in the first round, the Chelsea Hornets found themselves in the semifinals on Wednesday, Dec. 28, with a chance to extend their winning streak to seven games.

Chelsea (12-4) used a strong second half as they got that seventh win in a row by taking down St. Charles out of Louisiana rather easily by a final of 50-37. The Hornets started the season on a four-game winning streak, but proceeded to lose four of their next five games. Chelsea has now rebounded quite nicely and is playing their best basketball midway through the season as they now find themselves in the finals of the tournament.

It wasn’t easy at first as St. Charles started the game on a 5-0 run before eventually taking a 15-11 lead after one quarter of play.

Chelsea’s offensive struggles continued into the second quarter as well, but their defense turned up the pressure only allowing six points. The Hornets were able to put up nine, which brought them to the half down by just two points at 21-19.

Coming out of the break, Chelsea turned up the pressure even more as they switched to a full-court press. The unrest at which the Hornets pressed St. Charles clearly agitated them as Chelsea converted several turnovers into points and finally found some offense putting up 21 third-quarter points. They did so behind three combined 3-pointers from Tyler Coleman and Sam Towery. Chelsea outscored St. Charles 21-10 in the quarter.

The fourth quarter brought much of the same as the Hornets converted their third straight quarter of holding St. Charles to 10 points or less. Chelsea’s defense only gave up eight points in the final quarter of play after they ran the clock on the offensive end of the floor.

In the end, no single player jumped off the stat sheet as the Hornets had possibly their most balanced scoring attack of the season. Coleman led the way with 11 points off the bench for Chelsea. Senior leader Joseph Lanzi added nine points, while Matthew Marquet and Sam Towery put up eight apiece. Jordan Arcecaux had a game-high 23 for St. Charles.

Pelham plays Monroe County this afternoon at 5:30 in the championship game.

By ALEC ETHEREDGE | Sports Editor ROEBUCK, SC – The Pelham Panthers have played one of the toughest schedules early... read more