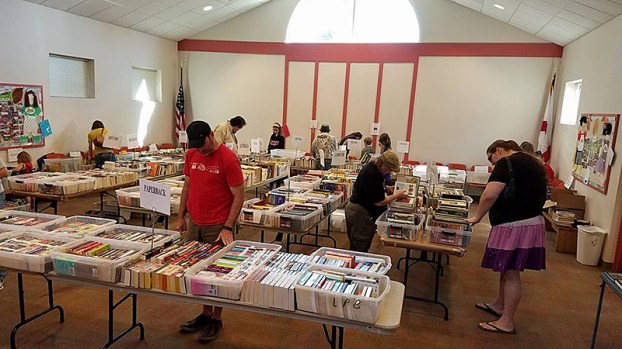 The Friends of the Library holds a book sale twice a year, once in April and once in October (pictured) with 100 percent of the proceeds going to the library. (Contributed)

ALABASTER – The Friends of the Albert L. Scott Library are always working to help the library be a place individuals enjoy visiting.

“We are there to help the library in whatever way we can,” said Friends of the Library President Judy Mosley. “None of the money we raise and donate to the library goes toward salaries or payroll. We are there for all of the extra things at the library.”

Hatcher, along with others interested in helping the library, formed the group and on March 31, 1983, the Friends of the Alabaster Public Library was incorporated.

Mosley said the group meets four times a year, on the second Monday in January, April, July and October at 6 p.m in the meeting room at the library.

“We are always looking for new members,” Mosley said. “The meetings usually last for about an hour.”

The group’s main fundraiser is a book sale twice a year, once in April and once in October.

“We receive donated books and we sell those at the book sale,” Mosley said. “All of the money we raise at the book sale goes to the library. Every book sale we average about $1,800-$2,200. Although we do foresee the number going down some in future years because people have started not buying books as much.”

Other duties the Friends of the Library volunteers do include mending books that need repair, sorting books in the book room at the library, which is open every Thursday from 3 p.m. to close, and restocking the “book nook” located in the library.

“We have books for sale throughout the year on the bookshelves in the book nook that sell for $1,” Mosley said.

There are three different membership levels including $10, $25, and a $100 membership which is for a lifetime.

“The perk of being a member is when we have the book sales, you get first choice of books at the book sale on the Friday night prior to the sale,” Mosley said.

Mosley said becoming a Friends of the Library is a good way to give back to the library.

“It is very easy to join, and the more volunteers we have the more stuff we can accomplish at the library,” Mosley said.

For more information about joining, Mosley said individuals can contact the group’s publicity chairperson Amanda Turner by visiting www.cityofalabaster.com. Applications to join are also available at the library.

The group also has a Facebook page, Friends of the Albert L. Scott Public Library.