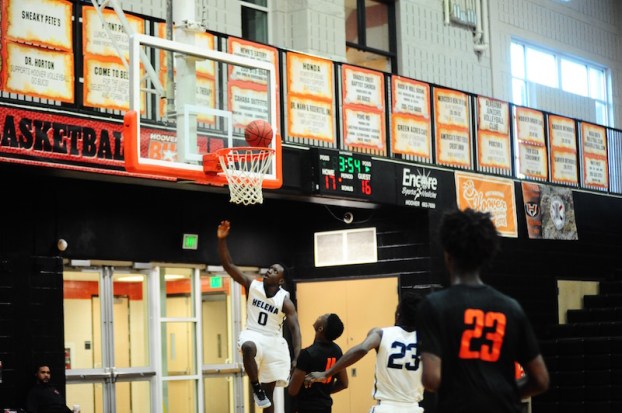 Dionte Tolbert watches one of his fast-break layups drop in the basket for two of his 12 points. (Reporter photo/Alec Etheredge)

HOOVER ­– Helena was on a roll coming into the Big Orange Classic at Hoover High School having won seven straight games before they fell to Gadsden City in the first round to snap that winning streak. The good news, it didn’t take long for the Huskies to get back on a winning streak as they won their next two in a row in the tournament over Anniston and Carver to put themselves in the championship of the consolation bracket.

In the championship game they faced off against Fayette County, a team they handled easily after going on a 47-10 run over the final three quarters to win 55-26. The win extended the win streak to three as they have now won 10 of their past 11 games.

“I’m really proud of our guys, I think we’ve got a lot of character on our team,” Helena head coach Chris Laatsch said. “We had just won a tournament and were hoping to win another one so to lose our first game was tough, but I’m proud of them for having character enough to try and win the consolation bracket and that’s what they did.”

Helena (15-4) got off to a sluggish start in the first quarter of the game offensively, but their defense matched the intensity of Tigers. Both teams struggled to find any room early to score as they were locked at a 4-4 tie with 1:30 left to play in the first quarter. They combined for nine points in the last 1:30, however, as Fayette took a 9-8 lead into the second quarter.

The Tigers came out strong in the second quarter to go up 16-8 and extend their first quarter run to 12-4. Things were looking up for Fayette, but that ended very quickly and dramatically. Helena ended the half on a 19-4 run to grab a 27-20 halftime lead. Once the Huskies started turning up the press defense, they forced several turnovers, which led to fast-break opportunities and sever and-one layups.

Helena had five straight possessions at one point in the second quarter where they forced a turnover that led to an easy basket and when a shot was missed, someone was there for the offensive board.

“Creating those turnovers led to easy baskets for us,” Laatsch said of his team’s defensive effort. “The attention to detail really seemed to stick out to me on the defensive side of the ball today.”

Laatsch had to be happy that this trend continued into the second half as the Huskies scored 13 more unanswered points to start the quarter and only gave up a total of three points in the third to give themselves a 42-23 lead.

Helena’s defense replicated that effort in the fourth only allowing three more points in the final quarter of play as they scored 13 more points to win by the final of 55-26. The Huskies outscored 28-6 in the second half and went on a 47-10 run from the second quarter through the final buzzer.

“I’m really proud of my guys,” Laatsch said. “I felt like they did a good job of attacking us early in that first quarter, but those last three quarters we really zoned in.”

Helena was led by an array of players as three of them scored in double figures. Jon Brown led the way with 19 points making seven field goals and all four of his free throws. Dionte Tolbert had a fantastic game on the defensive end getting several steals that led to easy baskets as he put up 12 points on five field goals and both of his free throws. Dionte Tolbert also added 10 points for the Huskies.

Huskies back on winning streak