A 26-year-old Pelham man is facing multiple felony charges after he was allegedly involved in a Dec. 29 domestic incident involving a child. 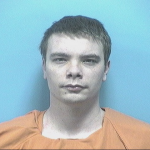 The Shelby County Sheriff’s Office arrested Devan Ray Bailey, who lists an address on Martin View Drive in Pelham, on Dec. 29 and charged him with first-degree kidnapping, first-degree robbery, interfering with child custody and violation of a protection order.

After responding to the incident, deputies, with the help of the Vestavia Police Department, were able to locate and take Bailey into custody without incident at about 11 p.m. off U.S. 280.

As of Dec. 30, deputies had not released further details about the domestic incident leading to Bailey’s arrest.

Bailey is currently being held in the Shelby County Jail on bonds of $103,000 for the four charges.

“Fortunately, there were no injuries to any of the parties involved and the investigation is on-going,” read an SCSO statement. “These types of incidents can be especially hard for families to deal with this time of the year, and we are thankful and relieved that it was resolved quickly and without tragic consequences.”

His probation was revoked after he was arrested on a DUI charge in Hoover in October 2015, leading him to be sentenced to 45 days in prison in early 2016.