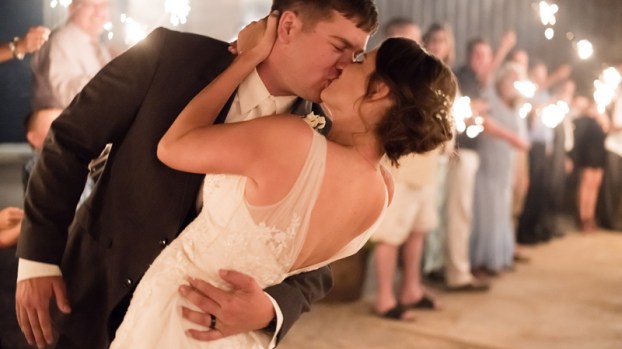 Cayla Crabb of Montevallo and Patrick Weber of Homewood were married on June 10, 2016 at Douglas Manor in Columbiana. The ceremony was officiated by the groom’s childhood pastor, Mr. John Mount of The Church at Ross Bridge.

Escorted by her dad, the bride wore a custom gown altered by Lindsay Lawrence. The illusion neckline was adorned with hand sewn appliqué. The dress fell into an A-line skirt and the train had lace appliqué placed throughout.

Her veil was edged with beading and was her “something borrowed” from her best friend’s wedding last year. Complementing the bride’s ensemble was a hand-tied bouquet of ivory garden roses and cream hydrangeas, held together with the lace sleeve of her mother’s wedding gown.

On the eve of the wedding, the wedding party, who were composed of friends from multiple states, celebrated with the groom’s parents at a rehearsal dinner at Douglas Manor.

The wedding day began early, as the wedding party enjoyed the day getting ready. The couple was wed at six o’clock in the evening. Following the ceremony, guests enjoyed heavy hors d’oeuvres, dessert and dancing in the indoor facility with the music of Deputy 5 Band.

Following a honeymoon trip to Punta Cana, the couple is at home in Montevallo, where the groom works for the city of Pelham, and the bride teaches third grade at Calera Intermediate School.

Top trends for brides before they say yes to the dress   Story by Lauren Dowdle Photos contributed   There’s... read more