Susan Dilipkumar Patel of Birmingham, Alabama, and Kevin Stone Ratigan of Alabaster, Alabama, were brought together in holy matrimony on Oct. 8, 2016 at the Hyatt Regency Birmingham – The Wynfrey Hotel in Hoover, Alabama. 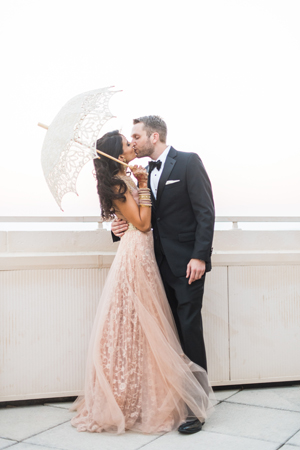 On Aug. 15, 2015, the couple was officially engaged after a proposal was made in New York City, at the top floor of the Whitney Museum. It was such a magical moment that even the chef at the museum sent a congratulatory brownie and champagne to the table.

The couple had a traditional Hindu wedding ceremony. The ceremony started off with the groom’s wedding procession, known as the Baraat. It consists of the groom seated atop a white horse, being led into the altar by the wedding party, family and friends. The horse was provided by 4H stables, out of Huntsville, Alabama.

The bride wore a cream and red lengha, made of raw silk and embroidered with antique gold work. The groom donned a cream sherwani with a red pocket square and dupatta. All bridesmaids were in traditional Indian sarees and the groomsmen in kurtas, which were made and shipped from India, thanks to Lawrenceville, Georgia-based Surinder Bedi. The Hindu ceremony was officiated by Shivram Vemagal.

After completion of the ceremony, all guests were treated to a full bar, cocktail hour, which naturally lasted two hours. The party was in full swing by the time the wedding party introductions were made and the reception began.

The reception tables were beautifully decorated with centerpieces arranged with ivory hydrangeas, cream and blush roses and hints of berry-colored carnations. Kathy G and Company, Inc., based in Homewood, Alabama, provided all decorations and flower arrangements. The lighting and music were all thanks to Indaglow Productions, out of Atlanta, Georgia. Decor to Adore in, based in Birmingham, provided the beautiful table linens. The five-tier wedding cake was supplied by Magic Muffins in Birmingham, Alabama. The Indian cuisine for the reception was catered by Annapurna Catering Service, from Montgomery, Alabama, and the American cuisine was provided by The Hyatt Regency.

As the reception came to an end, the newlywed’s grand exit included a shower of rose petals and an exit made in a 2015 Tesla. The night will be forgotten by none, and remembered always, thanks to the diligence and hard work of the wedding planner, Becky Baker of Becky’s Brides in Birmingham, Alabama. What an unbelievable day!