Brooke Elizabeth Quinnelly of Hoover and Caleb Lee Payne of Pelham were united in marriage Oct. 1, 2016 at Park Crest Event Facility in Hoover. The ceremony was officiated by Pastor Blake Lindsey of Church of the Highlands. 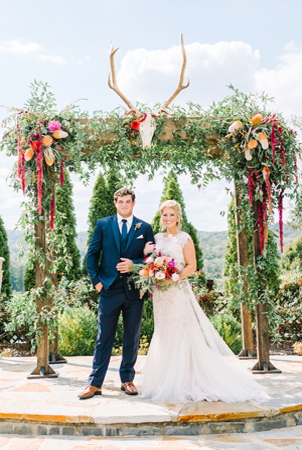 The groom is the son of Mr. David Payne and Mrs. Dana Martin of Pelham. He is the grandson of Mr. Willard Payne and the late Lou Payne of Birmingham and Mr. and Mrs. Stanley Lee of Griffin, Georgia.

Escorted by her father, the bride wore a beautiful champagne dress from Alfred Angelo. The front of the dress was more conservative while the back of the dress was open back and the train laced with tulle. Complementing the bride’s ensemble was a hand-tied bouquet of exotic flowers with vibrant colors to create the ultimate southwestern boho-style feel.

On the eve of the wedding, the wedding party, who were composed of friends and family, celebrated with the groom’s parents at a rehearsal dinner at The Gas Lighthouse. The wedding day opened with a champagne toast and lots of excitement. Following the ceremony, guests enjoyed dinner, dessert and dancing in The Carriage House at Park Crest.

Following a wedding trip to Mexico, the couple is at home in Bluff Park, where the groom is a builder for Mancha Hardscapes, and the bride is an account executive for ABC 33/40.

Popular treatments for brides before the big day Story by Lauren Dowdle Photo Contributed All eyes are on the bride... read more