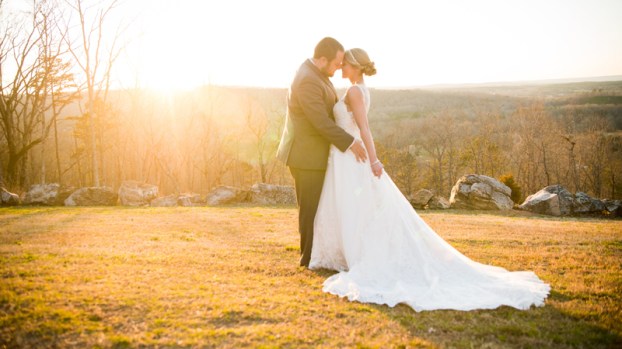 Bari Elizabeth Rasco of Columbiana and Adam Lawson of Calera were married on March 5, 2016 at Wilsonville United Methodist Church. The ceremony was officiated by the Rev. Don Cross and directed by Rebecca Turner.

The bride is the daughter of Mr. and Mrs. Russell Rasco of Columbiana. She is the granddaughter of Beverly Fetterolf of Helena. She graduated from Shelby County High School and the University of Montevallo. She is a second grade teacher at Oxmoor Valley Elemtary School.

The groom is the son of Joyce and Vince Pickett of Calera. He is the grandson of Mr. George Raney of Dora. He graduated from Calera High School and the University of Montevallo. He owns his own lawn care company and is a basketball coach for Calera High School.

Escorted by her father, the bride gave roses as she walked down the aisle in memory of her grandparents Drew Fetterolf, Sarah Rasco and J.C. Rasco, and in memory of the groom’s grandmother, Linda Raney,

The bride wore a blush-colored David Tutera dress that had a heart from one of her dad’s shirts sewn into the skirt. She wore custom shoes painted with “Mrs. Lawson,” the wedding date and a New York skyline. Complementing the bride’s ensemble was a bouquet of tulips and a pearl bracelet given to her by her groom.

Music during the service was provided by Katie Turner and Jon Harrison. The first kiss was celebrated by the crowd when the groomsmen all held up signs giving the kiss a 10.

The reception was held at the home of Zack and Brandi Kellis, which was beautifully decorated by friends of the bride’s family. The bride’s cake was a simple, tiered cake with the initials of the bride and groom. The groom’s cake was a chocolate, Crimson Tide cake. Entertainment was provided by Five Dollar Shake, a band which includes Chad Baker, Bari’s elementary school P.E. teacher. The reception included chicken fingers and mashed potatoes, favorites of the bride and groom.

On the eve of the wedding, the wedding party, family and friends celebrated at a rehearsal dinner hosted by the groom’s parents. The couple was surrounded by friends and family from Alabama and Pennsylvania.

After a wonderful trip to New York City, the couple lives in Calera with their dog Rue.

Why I love Shelby County-Lauren Woolley