Kaitlyn Creel, a young Helena woman, an HHS graduate, who has 1,074 friends on Facebook, has been chronicling her experience in the “World of Retail” over the past year.

Currently, in a seasonal position at Macy’s, she previously worked at Michael’s and Spirit Halloween while attending college classes and seeking a definitive decision about her best next direction in this journey we call life. 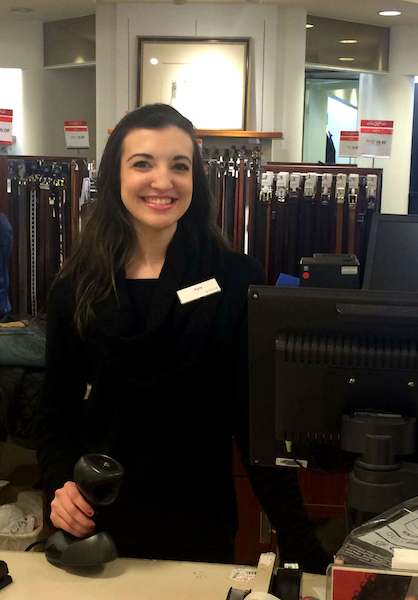 Kaitlyn Creel has been chronicling her experience in the “World of Retail” over the past year. (Contributed)

“If y’all want to know, people keep blaming this seasonal craziness on the holiday called Christmas,” she said. “I will never believe that or let that be an excuse. If you’re really celebrating said holiday, you’re wrong.”

Creel said the holiday is about the opposite of everything people are doing and putting into the atmosphere.

“An older lady, shopping with her daughter and a friend, came up to me,” Creel relates. “They treated me like I was something found on the bottom of their shoe. They asked me if I had coupons, that the items in the store were too expensive.

“She kept pushing me for coupons, and I explained to her that I am new, and the girls who were supposed to help me left me alone and I had no one to immediately ask,” she continued. “She then said how incompetent, worthless and dumb I am. That I shouldn’t be in this business if I don’t put her first and she also told me I lack people skills.”

Creel said the woman told her she should’ve gone to another register because Creel didn’t know what she was doing and shouldn’t be there, and then pressed her for more coupons.

“Finally,” Creel said, “I told her I wasn’t hired to give out coupons. She screamed, ‘What chu say?’ Some cussing followed this. Then I smiled my huge Harley smile and said, ‘Ma’am, we all have to start somewhere. And I’m only here until I get my degree. I don’t lack people skills – you’re sadly mistaken on that one.’”

Creel said the next ladies in line were “sweet and sympathetic” to her.

“If you’ve ever given crap to a cashier, please, reconsider,” she said. “It’s not customer service…it’s called being a human being. Among other crazy happenings, I realized that I have been working three retail jobs this year because it gave me the motivation to not want to do that for the rest of my life and to be more confident in myself, my abilities and be okay with maybe one day not making thousands a year but being happy with what I am doing. That’s all I want.”

Creel decided to take a customer poll to ask, if they had the ability and passion for dance and performing, what would they do.

“The first lady I picked was my only answer,” she said. “She told me her daughter is 19 and an actress in California and gave me her name and number. She told me I looked like Anne Hathaway and gave me info on a model/talent agency in Birmingham.”

The two talked for about 45 minutes, Creel said, adding, “I need constant reassurance, and the word Julliard was said to me by three different people today, three different times. Even though Julliard isn’t a possibility, living, performing, and the arts seem to strongly be so.

“And that,” she concluded, “is honestly the magic of Macy’s.”

By LAURA BROOKHART / Community Columnist Along with our chosen celebrations of the holiday season, we traditionally turn to a... read more