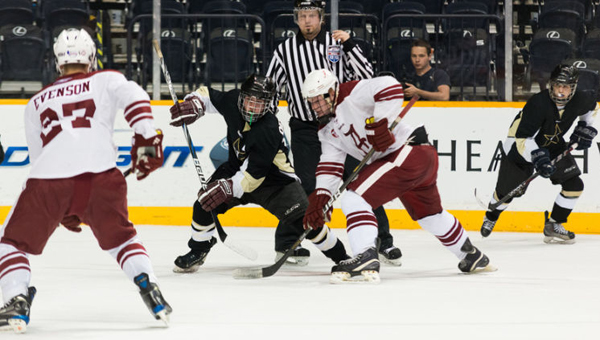 Alabama Hockey's first four games of the spring semester have been rescheduled. (Contributed)

PELHAM – The relationship between the Pelham Civic Complex and Ice Arena and the Alabama Hockey program seems to be on shaky ground, according to a news release from Alabama Hockey on Jan. 1.

The times for the team’s first four games of the spring semester have been changed from their originally scheduled times. The team opens the semester on Friday, Jan. 6, against the University of Oklahoma.

“This was not a decision made by the Alabama Hockey staff, but one made due to the fact the main arena will still be unavailable for use to start the second half of the season,” team president Jon Lovorn stated in the news release.

Lovorn apologized to Alabama Hockey patrons for any inconvenience the rescheduling may have caused and said the program is committed to providing the best experience possible for game attendees. Lovorn said he is “extremely disappointed” with the civic complex’s lack of communication regarding the reconstruction of the rink.

“I was told that the main rink was supposed to be up and running on Oct. 6, then Dec. 6, and now it holds an undetermined finish date,” Lovorn stated. “Although I will be the first to admit that I am no expert on reconstructing an ice surface and I understand that delays happen, I do believe better communication is warranted when dealing with circumstances of this nature.”

Contrary to Lovorn’s statement, the City Council and Tate discussed during a September work session that the goal was to have the arena up and running by mid-December, but the project isn’t expected to be complete until mid-January. Civic complex facilities administrator Danny Tate said the main rink is expected to be ready in time for Alabama’s game against Auburn on Jan. 20.

“To have the best scenario you have to communicate,” Tate said. “We knew we’d have issues with the main arena being back up by the beginning of January, and as soon as we realized that wasn’t going to happen we reached out to them.

Tate said the Civic Complex still does not have a copy of Alabama Hockey’s practice schedule.

Because of rink rescheduling in the fall, the news release stated that the team was “forced to practice very late on weekday nights,” with some practices beginning as late as 10:30 p.m. and ending around 11:45 p.m. In addition, three of the program’s four home games in the fall suffered from unannounced delayed starts that team personnel were not informed of until they had already arrived at the rink, according to the release.

Tate said the Civic Complex has had to cut back on the number of public skating sessions offered, and make changes to programs offered by the city, like the youth and men’s hockey leagues.

“The public has expectations,” Tate said. “This facility was built for the community and we have to have public skate sessions and accommodate city leagues and programs. It’s frustrating because we’re trying to be fair to UAB Hockey also.”

UAB Hockey also plays all of their home games at the Civic Complex.

“Of course the situation isn’t ideal, but things with UAB are going well because they communicate,” Tate said. “But they also don’t have as heavy of a schedule as Alabama does.”

The Jan. 7 game will be the team’s latest home game of the season. Only the Midnight Madness game at Liberty University on Sept. 30 dropped the puck at a later time.

The Pelham Civic Complex is the only ice rink facility in the area that can accommodate Alabama and UAB hockey leagues.

By NEAL WAGNER / Managing Editor ALABASTER – A 68-year-old Alabaster man is facing up to 20 years in prison... read more