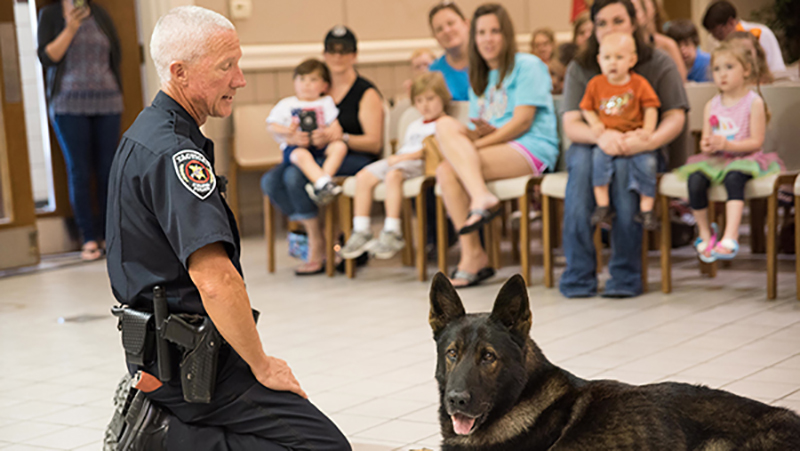 Helena Police Officer and K9 Handler Philip Richards tell children about the department’s 10-year-old German Sheppard K9 Bak on Wednesday, July 6 at the Helena summer reading program. Bak passed away from cancer on Nov. 29 and the department is currently looking for a new K9. (File)

HELENA–A little more than a month ago, the Helena Police Department lost a member of its family. Now, a Helena resident has decided to step up and help the department in the form of a fundraiser.

The department’s 10-year-old K9 Bak passed away from cancer rather suddenly near the end of November 2016 and while he certainly will not be forgotten for all his hard work, the department still needs to find a replacement K9 for the future.

Finding a well-trained K9 can be costly and to try and help offset this cost, Helena resident Chris Williamson said he started two fundraisers in hopes of helping the department.

“About a month ago I shared the story of Bak passing away and my cousin said ‘you ought to start a fundraiser,’” Williamson said. “I called Chief (Folmar) to make sure it was OK and he said it was. So far, $1,500 has been raised with $800 being raised in the first fundraiser and then a lot of people went straight to the police department to give donations.”

Williamson said he started a second fundraiser on Jan. 4 using the website Gofundme as a more user-friendly way for people to give.

Helena Police Chief Pete Folmar said a new K9 can cost anywhere between $5,000-$12,000 and while the department didn’t go out looking for donations, he said that any help people want to provide is welcomed.

“Dogs and dog training are near and dear to Chris’s heart and when he called me to ask if it was OK to do a fundraiser I was all in favor of that,” Folmar said. “All of our dogs were bought and paid with donations in years past as well.”

Folmar said Bak serviced the city and the Helena Police Department for close to nine years and was everything you could ask for in a police canine and the department will look for a new dog with similar traits and qualities.

“He was very good with the community and in the schools,” Folmar said. “Bak was very good at finding narcotics and tracking people and that’s primarily a credit to Officer Philip Richards. To keep a dog that sharp for that long is a reflection on the dedication and hard work of the handler.”

The Helena Police Department primarily uses a K9 for finding narcotics and tracking.

“The dog we purchase will primarily be used for narcotics and tracking,” Folmar said. “Most of the tracking the dog will do will be tracking children or elderly people who have wandered off. It will be a less aggressive type of service is what we use our dog for more than anything. In my experience, Shepherds and Labs are better for that. Ultimately we want to buy the best dog available from the trainer and I’m not married to one breed or the other just as long as we get the best trained dog.”

Those wishing to donate can do so by visiting the Gofundme page at Gofundme.com/k9forHelenapd or a donation can be made directly to the department to Captain Penhale.