Hornets get and-one with 1.8 seconds left to win 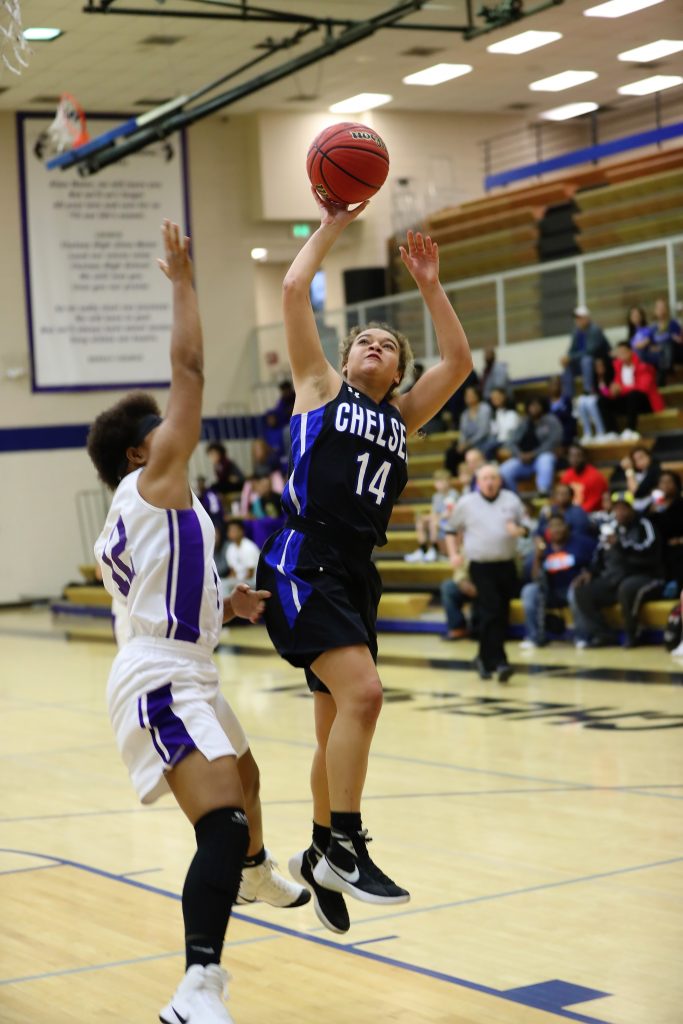 CHELSEA – The Chelsea Lady Hornets got their 10th win of the season in the second round of the Jefferson-Shelby Hoops Classic. Chelsea, one of four hosts in the tournament, used an and-one shot with 1.8 seconds left from Michaella Edwards to give them a three-point 57-54 win.

Chelsea (10-8) started the game strong on an 8-0 run and looked like the better team early on as they took advantage of being the better team. Pinson Valley came into the game having won just one game this season.

The Lady Hornets finished the first quarter with a 12-6 lead as they had set the momentum for which the game would be played. They continued that momentum into the second quarter as they eventually jumped up 21-11 after going on a 9-3 run. Finally, the Indians took advantage of Chelsea’s Allie Miller being in early foul trouble as they caught fire from deep making several 3-pointers and closing the quarter on a 10-2 run to climb back into the game and only trail 23-21 at the half.

This trend continued into the third quarter as the Hornets couldn’t buy a defensive rebound. Pinson crashed the offensive boards on several possessions, which led to easy second chance baskets. The Indians had all of a sudden grabbed the advantage before the return of Miller sparked Chelsea. Miller had a steal and fast-break basket on three of four possessions to spark Chelsea late in the third. If it weren’t for her efforts the Hornets would have trailed by more than one, but they were able to close the gap and head to the fourth trailing 36-35.

Chelsea had been outscored 30-23 over the past two quarters and needed their offense to fins some rhythm in the final frame.

They did just that as Miller got a couple more steals and fast-break opportunities that led to easy assists. Both teams battled back-and-forth all the way to a 52-52 tie with 36.3 seconds left to play. Pinson made a quick basket to go up 54-52, but every time they pulled ahead in the fourth, Chelsea had an answer as they tied the game up at 54 on the next possession.

On the ensuing possession, the Lady Hornets got a big defensive stop and boxed out for a big rebound. After a timeout, Chelsea brought the ball up court, where it was eventually given down low to Michaella Edwards, who threw up a shot through contact that bounced in plus the foul. She sunk the free throw and the defense watched as a final heave by Pinson came up short. The and-one by Edwards gave the Hornets a thrilling 57-54 win as they advanced to the quarterfinals of the Jefferson-Shelby Hoops Classic.

Edwards led the way on the stat line with 32 points and eight rebounds, but Miller’s performance was the highlight of the night. In limited minutes she posted 10 points, five rebounds, five assists and six steals. Getting at least five in all four of those categories is very rare and a huge reason why the Hornets held on for the win.

By BAKER ELLIS / Staff Writer NORTH SHELBY – For the first time in Steve Renfroe’s tenure at Briarwood, the... read more