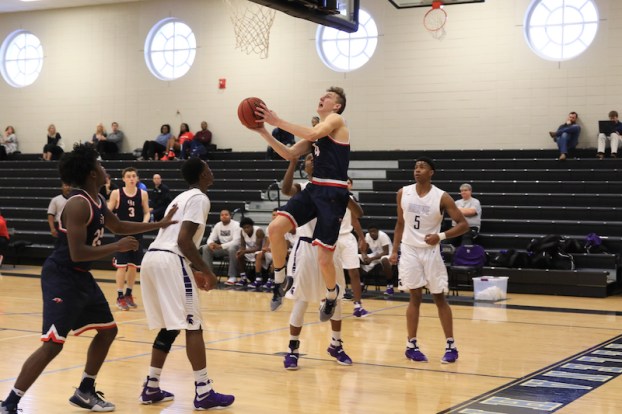 Oak Mountain fell in the second round of the Jefferson-Shelby Hoops Classic, but they weren’t alone as only three county teams advanced. (For the Reporter/Dawn Harrison)

Here is a full recap from round two action:

Despite a game-high 25 points from Stephen Campbell, Vincent fell to Corner at Corner 52-44. The Jackets were on a strong run as of late winning several in a row, but dropped to 12-6 on the season. They do, however, still boast a 1-0 record in area play.

Montevallo came into the game as the No. 4 ranked team in Class 3A, but hadn’t played in a couple of weeks. The rest clearly showed as the Bulldogs fell to Fultondale in the second-round 59-54 in a close contest.

Calera came into the game on the winning end of seven straight games, but fell to Shades Valley by a final of 62-56. Calera took a 26-25 lead into the half, but failed to grab rebounds in the second half as they allowed Shades Valley to grab several offensive boards and go on a run. It was close until the end, but the Eagles couldn’t overcome the hurdle. Just like the first round, Yatil Gant and CJ Smith combined for 33 of the teams 56 points.

Chelsea played possibly their worst game of the year as the Pinson Valley defense seemed to bother the Hornets all night. Chelsea’s nine game winning streak came to an end as they lost 70-43, but the game was a lot closer than the score represented. Even playing as bad as they did they were only down by four late in the third quarter.  Pinson went on a run to go up 14 heading into the final frame, which allowed Hornets’ head coach Nick Baumbaugh to play a wide array of players. Matthew Marquet and Joseph Lanzi led the way with 12 and 15, respectively.

The Eagles fell to 12-6 on the season as they lost 45-40 at the hands of Pleasant Grove. There seemed to be a lid on the basket for Oak Mountain most of the day as they struggled to get any shots to drop. They still hung in and fought hard and had their shots fallen could have easily won this one. This team will be fine as the move on, just a tough day shooting, which happens frequently in this sport.

Clay-Chalkville came into this game unranked, but boasting at least an 11-1 overall record they are one of the better teams in the state. Helena came in having won three consecutive and 10 of their past 11 games. It was a toss-up on who would win, but the consensus was that Clay-Chalkville was the better team. The Huskies didn’t listen to that talk as they won their fourth in a row in impressive fashion 58-42 to be the only guys team in the county to advance.

The No. 4 ranked Bulldogs had another impressive outing even after taking a long break like the guys as they almost doubled up Fultondale 43-22 to become the second of three teams to advance to the quarterfinals.

In a low-scoring defensive battle, Vincent fell to Corner on the road 29-18. Vincent held Corner to just a two-point halftime lead, but allowed them to go on a run in the second half to run away with the 11-point win.

Thanks to a last second and-one basket from Michaella Edwards, Chelsea advanced with a 57-54 win. A separate story for this game is also available to read.

This was probably the game of the day and the most unfortunate loss for Shelby County as the Warriors had a chance to win the entire girls side of the tournament. It just wasn’t meant to be as the Lady Warriors fell in one-point double overtime 40-39 loss.

Another tough game on the girls side as several more teams could have advanced with one or two extra possessions was the Oak Mountain loss to Clay-Chalkville. The Lady Eagles fought hare, but fell 44-40 to a very good Clay-Chalkville team.

No final score for this game has been given at this time, but Pleasant Grove advanced past the Huskies.