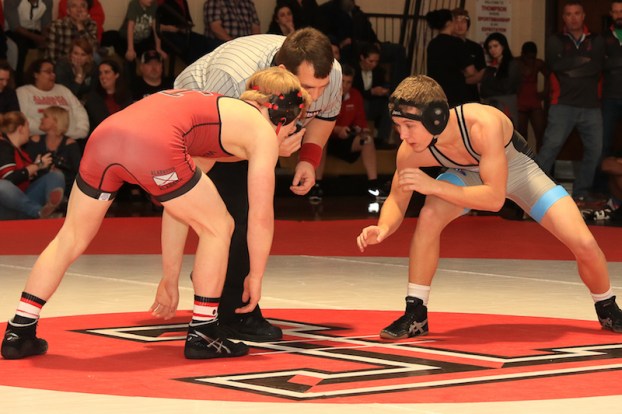 Spain Park and Thompson faced off in a big area matchup on the mats on Tuesday, Jan. 4. (For the Reporter/Dawn harrison)

ALABASTER – The Spain Park wrestling team traveled to Thompson High School on Tuesday, Jan. 4, to take on the Warriors in a big area matchup with one of the best wrestling teams in the state and the country. The Warriors acted just like Warriors and came out on top with a rather impressive 66-12 win over the visiting Jaguars.

Though the match itself wasn’t close, both teams saw big accomplishments individually.

Many Allan of Spain Park was the Jags bright spot as he took down Thompson’s Aubrey Glidwell with a fall at the 3:56 mark in the 220-pound division. The win for Allan kept him undefeated on the year and brought his overall record to 25-0. Quite an impressive streak for the young man, who is cementing himself as a favorite for a run at a state championship in the 220-pound race.

Another impressive individual feat was set by the Warriors Sam Latona. Latona defeated the Jags’ Jackson Janousek in the 106-pound weight division with a fall at the 2:43 mark. Latona is another one of those individuals that can make an individual push at state and will help this Warriors team go as far as they want to. He is rated a four-and-a-half-star wrestler by trackwrestling.com and also just cracked the top 20 wrestlers in the country in the 106 division according to flowrestling.org. Latona’s record so far this year according to trackwrestling.com sits at the 54-6 mark with 15 pins.

The only other Spain Park wrestler to get a pin in the match was Omar Mohammad as he picked up an additional six points for the Jags to bring their match total to 12.

Besides Latona, eight additional Thompson wrestlers picked up six points for the Warriors as only two lost and just three failed to pick up a perfect six.

Chandler Akins picked up five points in a win over a good wrestler in Jack Rivers in the 113 division. Gabe Hixenbaugh also got a good win for Thompson with a major decision over Gaven Pudlik to continue his hot start to the season.

Full results from the match are listed below: