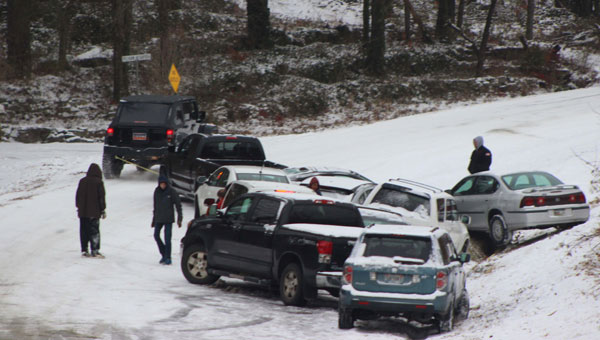 CALERA – A winter storm watch is in effect for Shelby County from 6 a.m. on Friday, Jan. 6, until 9 a.m. Saturday, Jan. 7, according to the National Weather Service.

NWS meteorologist Mark Rose said sleet or snow is predicted to begin falling between 9 a.m. and noon on Friday and is predicted to increase in intensity in the afternoon and into the evening.

Rose said 1-2 inches of snow is predicted to fall across Shelby County, with the snow letting up around midnight on Friday.

Shelby County officials took part in a weather briefing the morning of Thursday, Jan. 5, in the office of Shelby County Emergency Management in Columbiana.

With temperatures on Friday predicted to peak in the mid-30s, Rose said anything on the ground won’t melt. Temperatures are predicted to fall into the low 20s by Friday night. The wind chill could dip as low as 15 degrees overnight.

“Don’t travel Friday night,” Rose said. “The roads could become icy, so I would advise everyone to stay off the roads unless it’s an emergency.”

Kevin Laws with the NWS said in a conference call with officials across the state that while much of the focus has been on the possibility of snow, sleet could have more of an effect on travel.

Gary Goggins with the NWS said to expect a prolonged period of freezing temperatures. Although Saturday, Jan. 7, is expected to be sunny, temperatures may not climb above freezing, delaying the melting of snow and ice.

“That’s the other potential problem, especially for anyone who becomes stranded,” Goggins said. “That’s why we’re really urging people to stay off the roads.”

California has earthquakes, northern states cope with blizzards, the southeast and eastern coasts deal with hurricanes and here in the... read more