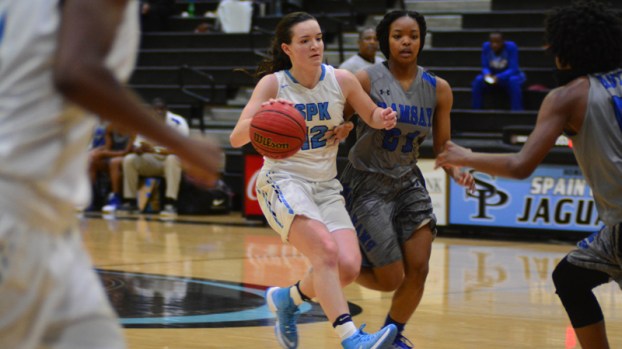 Jags fall to Ramsay as start of area play looms

HOOVER – Spain Park High School’s varsity girls basketball team fell to Ramsay, 58-46, on Tuesday, Jan. 3 in one of its final tune-ups before the start of area play.

The Jaguars (11-7) are scheduled to visit Homewood on Friday, Jan. 6, and then begin area play by hosting Oak Mountain on Tuesday, Jan. 10.

Against Ramsay, a slow start to the game and the second half doomed Spain Park.

The host Jags managed only seven points in the first period while the visitors tallied 16 points, led by six points from Caitlyn Carter.

SPHS narrowed the deficit to 25-22 at halftime thanks to a second period in which it outscored Ramsay 15-9, as Sarah Ashlee Barker (two), Claire Holt and Ahrielle Parks all sank three-pointers, and Holt added three made free throws.

But Ramsay pulled away in the third period, holding the Jaguars to seven points again while scoring 18 of its own, with Courtney Lee’s eight points leading the way.

Spain Park outscored Ramsay 17-15 in the final period, but it was not enough.

Holt was Spain Park’s leading scorer in the fourth quarter with seven points, and in the game with 20 points.