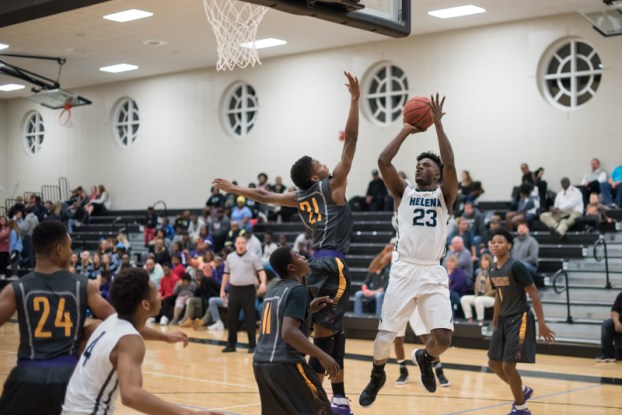 Helena’s Jon Brown set a school record with 39 points and 15 rebounds in a win against Minor on Thursday, Jan. 5 in the semifinals of the Jefferson–Shelby Hoops Classic. (Reporter Photo/Keith McCoy)

Now that I have seen almost every county school play this is my two cents on a few players in the county that have really impressed me. Three guys have stuck out as not only scorers and great basketball players, but leaders that truly enjoy the game of basketball.

Perhaps the most impressive player to me simply because of the smile he has on his face the entire game, while also being a leader. Posting close to 20 points per game this year for the Huskies and has them at 17-4 after winning 12 of their past 13 games.

Lanzi plays with more passion than anyone I have seen so far this season. Dude is the definition of leader. Basically a quarterback on the floor as he keeps his guys focused and knows the right moves to make. An extension of head coach Nick Baumbaugh.

Might be the breakout player in Shelby County this year. Averaging around 20 points per game and close to five assists, five rebounds and five steals per game. Unheard of kind of stat line as a junior point guard. He has helped lead Pelham through injuries and a brutal stretch of the schedule.

Stephenson has been a clear coach on the floor for head coach Chris Love and the Oak Mountain Eagles. If he catches fire from deep, he is more than capable of putting up double-digit points in a quarter. Another one of those guys with a high basketball IQ that plays fundamentally smart.

Other guys to catch my eye are obviously Jamal Johnson and Alex Reese. Johnson has been the main point scorer for the Jags, but their difficult schedule has hidden Spain Park early in the season. Expect a strong finish from him.

Reese, on the other hand, has been injured all year long and still put up crazy numbers. He will come back in the second half of the season on a mission to lead the Panthers to a deep post season run.

Stephen Campbell and Da’Shaunte Smith have also been impressive for Vincent and Montevallo, respectively. Both have scored 20-plus points more times than not this year as they have led their teams. Campbell is a scoring machine and you know he is getting the ball, but still difficult to stop.

Smith started out the season as one of the most impressive players in the county coming close to several triple-doubles, but his cockiness cautioned me. Now that I have watched him even closer, he has become a leader for the Bulldogs. Vocally keeping his guys morale up and playing very upbeat. He also earned the right to be a little cocky.

All of these guys are up for player of the year in Shelby County as well as others, and each still has the most important part of the schedule ahead of them. Keep representing and enjoy for what some of you will be your last high school basketball games.

By ALEC ETHEREDGE | Sports Editor CORNER – Two of Shelby County’s best basketball players faced off against each other... read more