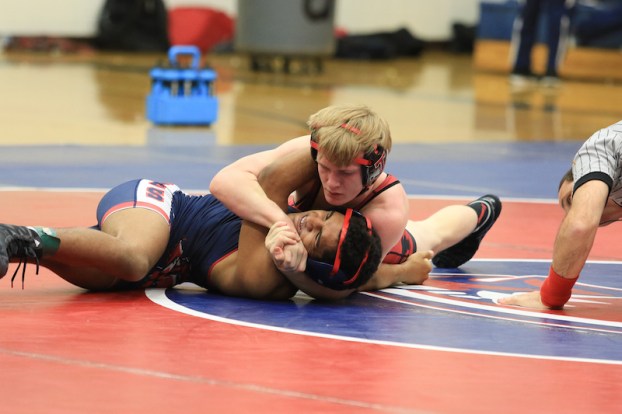 Thompson’s Gabe Hixenbaugh pins Kevin Rojas of Oak Mountain in a match of two good wrestlers. (For the Reporter/Dawn Harrison)

NORTH SHELBY – Oak Mountain hosted Thompson on the mat in a big area wrestling match on Wednesday, Jan. 4. It was a premier matchup of the second and third place finishers in last year’s state wrestling meet.

The Eagles edged the Warriors in that meet as they took home third, while Thompson, who was denied the championship crown for the first time in six years, finished third. This time around the Warriors were able to get the better of Oak Mountain as they took them down 38-24.

The first four weight classes started the Warriors out strong as they put up 19 points to the Eagles’ zero. Sam Latona continued his strong season by pinning Sullivan Tipton for six points. Chandler Akins and Emmanuel Oliver both got decisions in the 113 and 120 weight class to add seven more points and Gabe Hixenbaugh got a pin in the 126-pound class to give the Warriors 17 unanswered points. 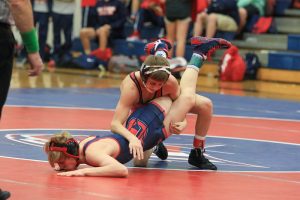 Sam Latona of Thompson pins Oak Mountain’s Sullivan Tipton to give the Eagels six points. (For the Reporter/Dawn Harrison)

Blake Randle, Mingyu Lee, Barrett Blakely, Justin Evans and Jaylin Gaines all did their best to keep Oak Mountain in the match, but all were only able to get decisions that totaled 18 points.

The only pin in the match for the Eagles came from Jordan Davis in the 220-pound weight class as he took down Aubrey Glidewell at the 2:22 mark.

Thompson got three pins and one forfeit to account for 24 of their 38 points. Sam Latona, Gabe Hixenbaugh, Jory Heindel and Seth Whitlock all tallied six points for the Warriors.

Full match results are below: