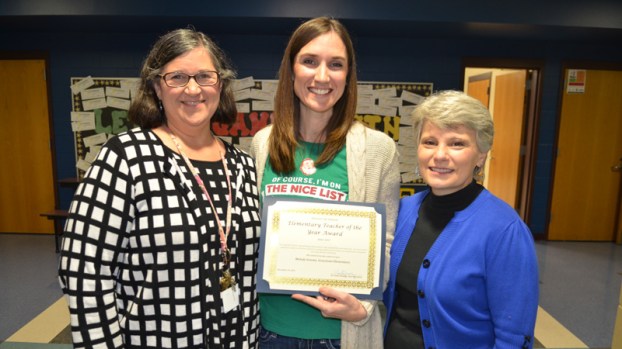 Greene was named the Elementary Teacher of the Year, and found out she had been selected in December when Hoover Superintendent of Education Dr. Kathy Murphy and staff from the central office showed up at Greystone Elementary School to present her with the honor.

“They showed up at Greystone unannounced, kind of like Publisher’s Clearing House,” Greene said. “I literally was speechless. I never thought that I would be the one to be given this honor. It was extremely humbling, but all that I could say at first was, ‘you have got to be kidding me!’”

Greene said she enjoys being a teacher because teaching is both academic and relational.

“I love finding new and interactive ways to teach each child in the classroom, however I find so much joy in truly finding the magic that helps each child to feel successful, part of a classroom family, and realize their greatness,” Greene said. “For a student to struggle to learn a concept and then realize that they can do it is so fantastic to see.”

While there were multiple factors that compelled Greene to want to become a teacher, she credits the contrast in her fifth and sixth grade years as a student as a pivotal time for deciding to pursue education as a career.

“I had a teacher in sixth grade who cared beyond my test score and homework completion,” Greene said. “I never missed an assignment in Mrs. Christie’s class, and failing her never crossed my mind. She made me believe that I was amazing and my opportunities were endless. The day sixth grade ended, I knew that I wanted to be a teacher just like Mrs. Christie. I wanted to a create a ‘best day ever’ for students just like she had for me. I wanted to be the ‘because’ in a student’s educational pathway. ‘Because’ I helped them to know that they could accomplish anything that they set their mind to do, they did.”

Greene said she hopes her students realize they were created with amazing talents and skills.

Greene earned a degree in elementary education from the University of Montevallo in 2003 and completed the rigorous certification process by the National Board for Professional Teaching Standards in 2010.

Greene is married to Ben Greene and has two daughters.

Greene will now be considered for Teacher of the Year for District 3 of the Alabama Board of Education.