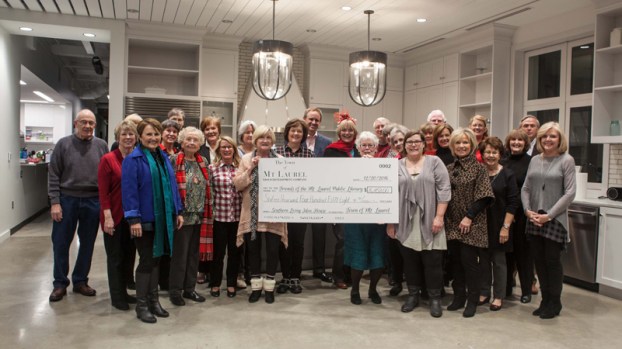 Donations were presented to Children’s of Alabama and the Mt Laurel Public Library. (CONTRIBUTED)

Every year, the Southern Living Idea House is focused not only on creating an inspiring home but also improving the surrounding community.

During the six months the home was open for tours, each admission fee benefited two Birmingham-based charities: Children’s of Alabama and the Mt Laurel Public Library.

The town of Mt Laurel announced that the 2016 Southern Living Idea House raised more than $16,450 for each organization.

More than 8,200 visitors from across the country came to Mt Laurel to tour the beautiful home.

“We are proud to have hosted so many visitors to our beautiful community,” said Julianna Vance, Mt Laurel’s marketing and community relations manager. “It was exciting to meet so many newcomers to Mt Laurel, whether they were from Birmingham or as far away as Texas or Pennsylvania.”

Children’s of Alabama plans to apply their donation to their Impact Fund.

“The Impact Fund gives Children’s of Alabama the opportunity to purchase state-of-the-art technology and pursue innovative programs without taking away from portions of the hospital’s general operating budget,” said Anna Blanche Pennington, coordinator of community development. “This separate fund enables us to purchase life-changing, and in some cases life-saving, equipment for our patients and doctors. Some of the services we have added through generous donations to the Impact Fund include artificial hearts, acute kidney dialysis equipment and surgery robotics.”

In celebration of the magazine’s 50th anniversary, its editors chose the town of Mt Laurel as the location for the 2016 Southern Living Idea House.

Located on the edge of Shelby County, Mt Laurel was a natural selection for the Birmingham-based publication, a tribute to its headquarters.

For more information on the town of Mt Laurel, visit MtLaurel.com.