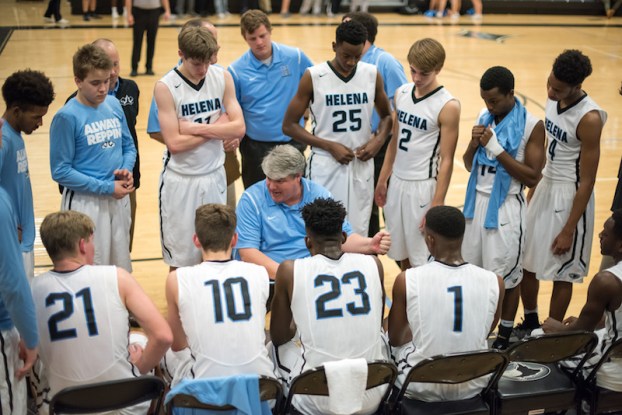 Helena advanced to the finals of the Jefferson-Shelby Hoops Classic by taking down Minor 57-51 in the semifinals. (Reporter photo/Keith McCoy)

Well the inaugural Jefferson-Shelby Hoops Classic was a rollercoaster to say the least. Definitely the first year of the tournament, but the future is bright if a few kinks can get worked out. In all, a great idea with some of the best basketball talent around central Alabama facing off against each other. Now that the finals have been snowed out for Friday, Jan. 6, and will be played at a future date and time to be announced, we can put to rest the final day of play for everyone not competing in the championship.

Winter Storm Helena isn’t the only Helena storm brewing in Alabama, the Helena Huskies are one of the hottest teams in the state right now and keep proving themselves against good talent. After beating Clay-Chalkville and Pleasant Grove in the first two round of the tournament, Helena took down a solid Minor bunch in the semifinals 57-51. The Huskies have now won 13 of their past 14 games and six in a row.

The boys’ championship game will feature Helena vs. Shades Valley at a date and time to be determined.

Shades Valley, the No. 10 team in the 6A ranks, handed the Lady Bulldogs their second loss of the year. Montevallo (12-2) fell to the Mounties by a final of 60-39 in the game. Lauryn Lilly posted 18 for the Bulldogs in the losing effort. Krystin Allen led Shades Valley with 17 points. The Mounties advanced to the championship game.

After losing to Pinson Valley in their first-round matchup, the Hornets (15-5) rebounded with a nice win over McAdory in the consolation bracket. The game was close with neither team leading by more than six the entire way, but some clutch free throws in the fourth quarter helped Chelsea preserve a 68-64 win. Tyler Coleman had a nice game for the Hornets posting 18 points while Sam Towery ended up with 12. Ten of Chelsea’s 12 players scored in the contest.

Another closely contested game took place at Oak Mountain High School as the Eagles hosted Mortimer Jordan. After struggling to hit shots in their first-round matchup with Pleasant Grove, Oak Mountain (13-6) looked much better against the Blue Devils outscoring them 53-50 in the game. Will Stephenson led the way with 15 points and four assists, while Chris Mayweather had another nice game with 10 points and eight rebounds.

Barrett Tindall scored 16 points to lead the Lions to a 51-45 win over the Wildcats. Briarwood moved to 8-7 on the year and is already 1-0 in area play.

Vincent’s recent struggles continued in a matchup with Gardendale as they fell to the rockets 54-52 in overtime. Stephen Campbell led the Yellow Jackets with 19 points as they fell to 12-8, but with a 1-0 area record they still remain the favorites in their area.

The first quarter was close, but with Yatil Gant in foul trouble and the defense struggling to stop the Cougars potent offense, Calera fell to Clay-Chalkville 86-64. The Eagles now boast a 12-6, 3-0 record and should win Class 5A Area 6.

The Warriors got their fifth win of the season on Thursday by taking down Oak Grove in the consolation bracket. They now have a record of 5-13.

The Bulldogs have been one of the better teams to start the season, but fell to Hueytown 56-47. Tavarus Hall led Montevallo with 18 points, while Da’Shaunte Smith added 16 as they combined for all but 13 of the Bulldogs’ points. They moved to 10-4 on the season.

The Oak Mountain Lady Eagles moved to 10-5 on the year after taking down Helena 38-29.

After a tough one-point double-overtime loss to McAdory in the second round, the Lady Warriors rebounded in a big way with a 47-20 win over Pinson Valley to advance their record to 12-6 this season.

By ALEC ETHEREDGE | Sports Editor Now that I have seen almost every county school play this is my two... read more