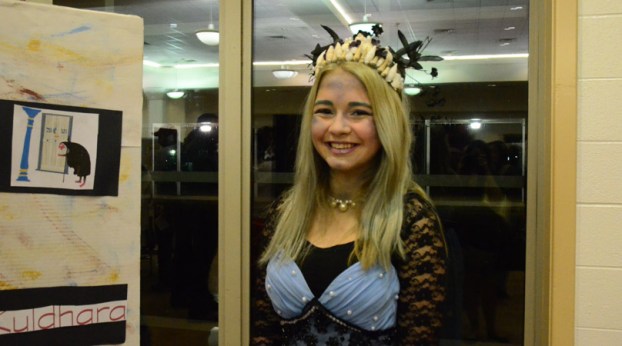 TMS student Grace Ray presents her project about Indian Folklore. Ray is dressed as a Maal, a mermaid-like creature said to dwell in rivers and lakes in Bangladesh. (Reporter Photo/Amalia Kortright)

“We have a number of after school activities that involve athletics and our clubs, but Night at the Museum is about instruction. Students are presenting on things they have been learning in class, and that is what makes this night so special,” said TMS Principal Neely Woodley.

TMS Teacher Patricia Tauber said she was inspired to start the event after another middle school held a similar event. She said it was modeled after the movie “Night at the Museum.”

“Our students prepared an artifact, attire, a trifold board and a presentation on a topic of their choice from early man through the Greeks,” Tauber said.

“It shows the fun things that you can do with history and really make history come alive. It certainly gives differentiated instruction, where students who may not be the best test takers are able to showcase their learning in a different environment,” Tauber said.

According to Tauber, students were assigned the project in November, shortly before Thanksgiving. Tauber said the project was designed to make students think and stretch their creativity.

“We typically gave them some time in class to work on those. They had to think about what type of attire would be for that civilization, and what type of artifact they would create,” Tauber said. “We were looking for homemade things that the students created themselves.”

Tauber said 224 students presented at this year’s Night at the Museum. During the following week, students will present their projects in their history classes for a grade. She and other TMS social studies teachers are proud of their students’ work.

“We are so appreciative that our students put so much effort into it. It’s the highlight of my year, and it’s one of the best times. I’m very excited for our students.” Tauber said.

Eighth grader Grace Ray said the project served as a way to get parents more involved in the educational process.

“It’s a way to let parents really see what kids are learning in class without just giving out report cards,” Ray said.

Ray said a lot of research went into her project, and she enjoyed working on it.

“I love it because it gives each student a way to express themselves through history,” Ray said. “It influences us to look at other parts of the world, it makes it more fun to look at history and there are no creative boundaries for this project.”