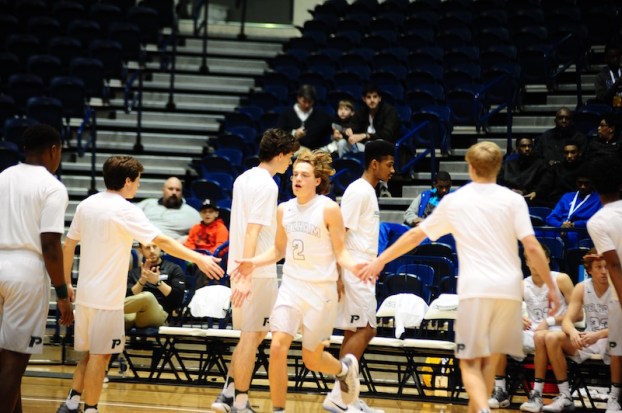 Justin Allison dropped 30 points in a loss to Vestavia on Jan. 5. (File)

Allison scores 30 in loss to Vestavia

VESTAVIA – The Pelham Panthers dropped their seventh straight game on Thursday night, Jan. 5, this time at the hands of the Vestavia Hills Rebels. The Panthers got off to a strong 9-1 loss with their only loss being to the state’s best team in Mountain Brook, but have trended down since then due to injuries and a tough out-of-state schedule.

In a game earlier in the week with Mountain Brook, Pelham got blown out 79-33, which started a lot of talk from other people that they were no good. First off, the Spartans are the best team in the state, second, the Panthers were without three starters including Alabama signee Alex Reese, who took notice of the trash talk and responded by saying he couldn’t wait to be healthy.

In their matchup with Vestavia, the Panthers were still without Reese and several other players as they looked to rest up and get healthy before area play starts, which meant Justin Allison, who has been one of the best players in the county and state, had to have the game of his life as really the only significant contributor playing.

Allison did just about everything he could have possibly done by scoring 30 points while posting five rebounds, four assists and two steals in the game, but it wasn’t enough as they fell in a tough, close game 62-58.

The game started close as Vestavia took a 10-8 lead after one-quarter of play, but Allison turned up the heat to start the second. He started the quarter with three consecutive 3-pointers to give the Panthers a 17-16 lead. Mitchell Rottier also had a nice second quarter hitting a couple of threes, including his second consecutive buzzer-beater in two quarters, but the Rebels ended the quarter on an 11-5 run to end the second as they took a 32-25 lead into the half.

Pelham came out on a mission in the third as they went on a 10-4 run to start the quarter. They eventually took a 39-38 lead off of a Chris Brown layup. Brown followed that up with two free throws to give them a 41-38 lead as he went on a 4-0 run by himself and the Panthers had started the quarter on a 16-6 run. Pelham held on to the lead over the final minute of the quarter as they took a 42-41 advantage into the fourth.

Vestavia started the fourth on a 7-0 run to sprint back in front by four. Pelham immediately answered that as they went on a 12-3 run and gained back a 54-49 lead with 3:40 left to play. Over the final three minutes, their seemed to be a lid on the basket for Pelham as Vestavia ended the game on a 13-4 run. The Rebels took advantage jumping out in front by making their free throws down the stretch to win 62-58.

Besides Allison’s 30 points, Brown added 12 and Rottier posted nine. The Panthers are on a skid right now having lost seven consecutive games, but when they get back to being healthy they will be a force in Class 6A Area 8, which features three of the best teams in the Birmingham metros area with Helena, Chelsea and the Panthers.

By GRAHAM BROOKS / Staff Writer HELENA–Led behind a record-setting performance by Helena forward Jon Brown and with a spot... read more