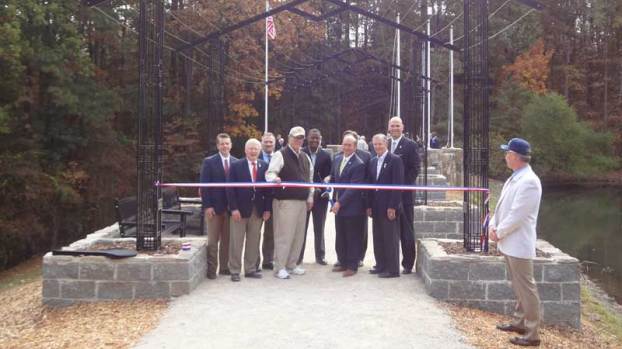 Photos by Emily Sparacino and Contributed

Nov. 7 was a special day for veterans and their families in Hoover.

Four days before Veterans Day, a ribbon cutting ceremony was held at the new Veterans Memorial Arbor at Aldridge Gardens, an area designed to honor all men and women who have served, or who are serving, in the Armed Forces.

“It’s a huge day for us in the city of Hoover, so we’re very excited,” Aldridge Gardens Chief Executive Officer Tynette Lynch said to the dozens of people gathered at the ceremony.

The arbor spans the 125-foot dam on the 6-acre lake at Aldridge Gardens and includes a ceremonial area overlooking the water, Aldridge Gardens Web-based Communications Coordinator Doug Black wrote in an email.

The arbor also features the U.S. flag and flags for all military service branches.

“It will have comfortable seating areas and the plan is for it to eventually be covered by flowering vines,” Black wrote. “In addition, the supporting cast iron columns have a unique modern design. The official ground breaking for the project was held last November.”

Installation of the arbor’s support columns started the second week of March.

During construction, residents were invited to make donations toward the project. Each $2,500 donation purchased a flag pole or a bench, along with a bronze plaque honoring one or more veterans who have served or are still serving the country.

In addition, people could reserve and customize brick pavers with a $250 donation for each paver.

Lynch recognized and thanked city leaders for their ongoing support of the project.

Mark Davis, chairman of the Veterans Memorial Arbor Committee and an Aldridge Gardens board member, thanked Executive Director Rip Weaver and the other board members for their work on the project.

“For me, today, I’m like a kid at Christmas,” Davis said. “This is a place of remembrance and reflection for families.”

Following the ribbon cutting, a flag raising ceremony was held as each branch’s song played.

A reception was held after the ceremony.