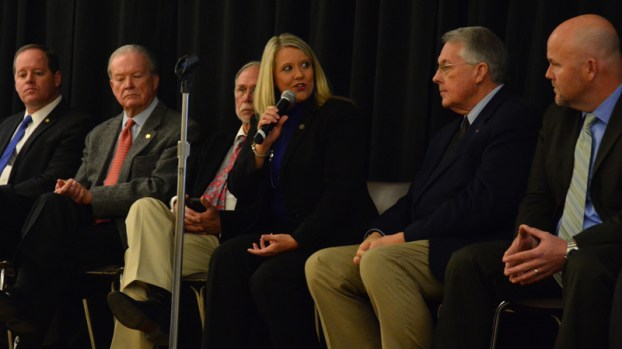 HOOVER – Alabama’s finances and criminal justice system will be two of the top priorities the state Legislature must address during its upcoming session, according to members of Shelby County’s delegation to Montgomery.

Ward also said state officials will have to address a federal lawsuit against the state for running a prison system that is unconstitutional because of the way it handles mental health issues.

And the state is facing a heroin “epidemic,” Ward said.

“This is not just a Shelby County issue; it’s a statewide issue,” he said.

The Alabama Legislature will reconvene Feb. 7 in Montgomery.

Rep. April Weaver (R-Brierfield) said the Legislature’s work will depend largely on what happens in Washington, D.C. with the incoming administration of Donald Trump, especially related to calls for repealing the Affordable Care Act.

“You can’t just repeal it without replacing it,” Weaver said. “That’s a wait and see game.”

Rep. Jim Carns (R-Birmingham)said Alabama could come under a consent decree because of the prison system and added that Jefferson County’s bankruptcy was the result of a consent decree.

“We do not need the state of Alabama to come under a consent decree because of the prison system,” Carns said.

Sen. Jabo Waggoner (R-Vestavia Hills) said he spends most of his time on his work as chairman of the Senate’s Rules Committee.

“It’s really the last stop,” Waggoner said. “It determines which bills will go to the floor for debate.”

Sen. Jim McClendon (R-St. Clair Springs) is a member of the Rules Committee who sponsored legislation for a state lottery after residents indicated they wanted the opportunity to vote on the issue.

“I didn’t get a touchdown, but I feel like I got it down to the 5-yard-line,” McClendon said in a football analogy but then added that the problem is that when a new session begins, “you don’t get to start at the 5-yard-line.”

Rep. Corley Ellis (R-Columbiana) was the only freshman legislator at the event.

Ellis said he wants to determine where he can do the most good.

“All of you are here to find out what’s going to happen in Montgomery, and that’s what I’m here for,” Ellis said.

Drake told the story of helping the son of a military veteran and his family receive benefits through Veterans Affairs.

“This guy was in dire straits,” Drake said. “It sent chills up my back. I knew this was what I wanted to do—I wanted to help people in the district.”

Fridy said he also plans to sponsor legislation about ending the state sales tax on groceries and a constitutional amendment about parental rights to ensure parents’ ability to raise their children “as they see fit.”

Fridy said a frustration for the Legislature is that agencies approach budgeting as a negotiation, often asking for more money than they need in hopes they end up with as much as possible.

“We don’t have room to negotiate with agencies,” Fridy said.

Rep. Arnold Mooney welcomed those in attendance to House District 43 and said the size of government is a problem that needs to be addressed.

“There’s a real concern from some of us, and I don’t mind voicing it, that government is too large in this state,” Mooney said.

Mooney closed by saying he is hopeful the state’s issues can be solved.