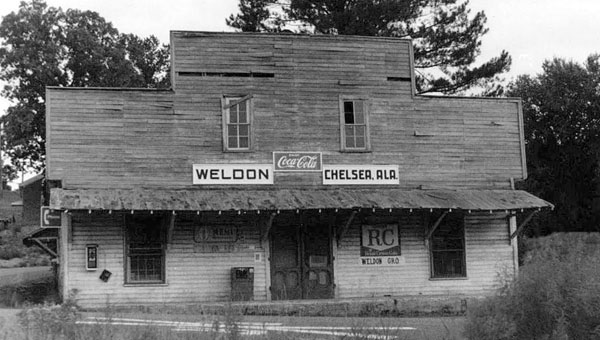 Judy Galamore’s grandfather, George Weldon, established one of the oldest businesses in Chelsea. Now, Galamore is trying to make sure its history is preserved. (File)

According to Chelsea resident Judy Galamore, the Weldon Grocery Store is an important part of Chelsea’s history, and it desperately needs to be preserved.

“I grew up in that store. People need to know the history of our town, and that was one of the very first businesses that opened in Chelsea,” Galamore said. “Even the new people should want their children to know how this city started.”

Galamore is the granddaughter of the store’s original owner, George Washington Weldon, who started the store shortly after the turn of the 20th century.

“[Weldon] was definitely a family man. He and his wife had 13 children, and my mother was next to the oldest,” Galamore said.

Galamore said Weldon learned to read and write at the age of 21, when he went back to school in order to open the store.

He bought the property where the store is currently located in 1901 and established the store in about 1902, almost a century before the city of Chelsea was incorporated. The store started out as a dry-goods store, and began selling cold items in the 1950s.

“I do know that it [was established] before they put out in the railroad track in 1908,” Galamore said.

The original building burned down and was rebuilt during the 1920s.

After Weldon’s death in 1951, his daughter, Velarie Weldon, ran the store. Once Velarie died in the 1980s, the family began to rent the space out to other businesses.

The family sold the store and the property it was on to the city of Chelsea.

“When we sold [the property] the wanted the city to do something with it,” Galamore said.

However, the store has sat empty for years. Galamore said she was appalled at its condition when she last visited.

“The wood is rotting, and the support posts are leaning. I cried when I went inside,” Galamore said. “That was the first time I wondered if they could save it.”

Galamore said she and other elderly Chelsea residents recall the Weldon Store as a gathering place for members of the community of all ages.

“For a dime, you could get a Coke and a piece of candy.” Galamore said. “There was an old, pot-bellied stove that people would gather around to talk. People would come there and stay all day.”

On Dec. 9, 2016, Galamore was notified that the store was listed in the Alabama Register of Landmarks and Heritage.

“It doesn’t mean as much to the new people as it does to the old folks in Chelsea, but it’s still historical,” Galamore said. “Once history is gone, it’s gone forever. You can’t bring it back.”

Recently, Galamore wrote a petition to involve the community in her efforts to preserve the Weldon Store.

“I started the petition because I want something to be done to preserve it. If they could just save some façade of it or move it,” Galamore said.

Galamore’s petition, titled “Preserve the old Weldon Store in Chelsea, AL and have it declared a historical site” is open for signatures online at Thepetitionsite.com.

Galamore and other members of the community also have physical copies of the petition. Galamore said the petitions have accumulated more than 500 signatures so far.

“I’d do anything to get it preserved, if it’s the last thing I do,” Galamore said.