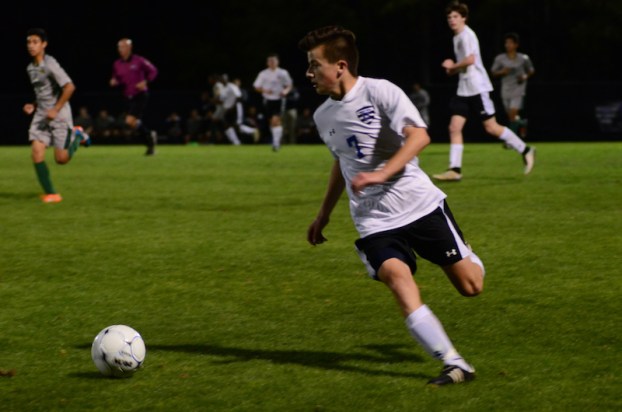 Chelsea’s Tony Nettuno will be just a sophomore this season, but already has a full year of varsity experience under his belt. (File)

CHELSEA – In the spring of 2016, the Helena Huskies won the 4A-5A boys soccer state title. By comparison, Pelham made a second-straight appearance in the 6A Final Four in what was supposed to be a down year for the Panthers. Now, both teams have been moved into 6A Area 7 following the 2016-18 reclassification, and will create a dynamic one-two punch in that area for the upcoming seasons. The third and final team joining Helena and Pelham in 6A Area 7 will be the Chelsea Hornets, who have failed to advance to the postseason in either of the last two seasons. This year, however, Wilee Miller and company are hoping to build around a returning group of players with top tier ball skills and a desire to get back into the playoff conversation.

“We’re in the same situation we were in before really,” Miller said, referring to Chelsea’s previous area which was comprised of themselves, Briarwood and Pelham. “Three good teams, someone is the odd man out. Pelham’s going to be the favorite to go back (to the Final Four) again because they have those same kids who are a year older. And they’ve got about as good a goalkeeper as anyone.”

Miller, referring to returning Pelham’s First Team All-County keeper Seth Torman, does not mention the keeper position by accident. A staple of Miller’s 10-year tenure at Chelsea has always been a strong keeper to shore up the back line, however with the graduation of Markus Frederick, the Hornets’ all-time leader in saves, there is a sharp chasm of experience now between the posts.

“I’ve been spoiled here,” Miller said. “I’ve had four goalkeepers go on and play in college in 10 years. Now I’ve got zero experience (returning). That is the huge question mark for us.”

With no keepers returning from last year’s roster, Miller has recruited six-foot-four inch Cole Glandon to take over those duties. However, Glandon is a basketball player, and depending on how the Hornets wrap up the year on the hardwood, Glandon may not be available until the soccer regular season has begun.

Helping man the defense while Glandon gets his bearings will be returning seniors Nick Craddock and Connor Greene. Greene led the Hornets in interceptions and blocks last season, and will likely set the school record for career blocks this year.

“Having a veteran back line should help him, and they know that they’ve got to help him,” Miller said.

Eli Alexander, a UAH commit, will help lead this Chelsea bunch in 2017 from an offensive perspective. A left-footed player capable of playing out wide on the wing or as more of a focal point in the attack, Alexander recorded the second-most goals on the team a season ago with nine and led the team in assists with seven. He will be one of the focal points in Chelsea’s version of a 4-5-1 attack, which will function as more of a 4-2-3-1, with two holding defensive mids. Helping Alexander will be a pair of sophomores who started every game as freshmen in the center of the field in Lando Nichols and Tony Nettuno.

“I couldn’t be happier with those two guys,” Miller said. “They are very good, skilled players.”

Nichols will move up this year into the target forward spot while Nettuno and Alexander will be underneath as attacking mids, and Miller is hoping those three can provide a creative offensive spark that has been missing from the Chelsea offense in recent years.

Even though Pelham will come into the season as the odds-on favorite to win the area and likely return to Huntsville for yet another shot at a state title, Chelsea came painfully close to beating the Panthers in both area contests last year, losing each in a shootout. Helena on the other hand graduated a whopping 16 seniors off of last year’s state title team, and while they still have pieces coming back, like midfielders Landon Gaskins and Vince Navarez, the Huskies will not be the same bunch they were a season ago. Miller believes this Chelsea team is as close as they’ve been in a while to breaking through.

“We know we’re not going to walk over anybody, we’re going to have to fight for everything we get,” Miller said. “But it’s been that way here for ages. We envision ourselves and always have as a playoff team, and we’ve not been that. We’ve changed our offseason workout to accommodate what we think were some weaknesses, we feel like we’ve addressed those, now we just have to go out there and make things happen.”

Allison scores 30 in loss to Vestavia