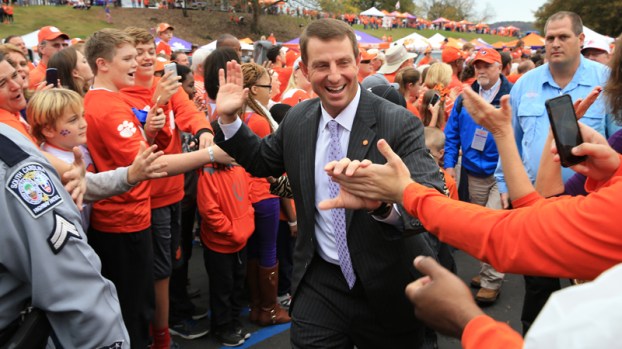 Dabo Swinney has reached the mountaintop of college football, but he remembers well where his journey began.

The head coach for Clemson University’s football team, Swinney led the Tigers to their first national championship since 1981 with a 35-31 win over the University of Alabama on Monday, Jan. 9 at Raymond James Stadium in Tampa, Florida.

Swinney’s love for sports, passion for winning and care for people were formed during his early years in Pelham.

Before graduating from Pelham High School in 1988, Swinney played receiver and cornerback in football, point guard in basketball and shortstop and pitcher in baseball. Though he would become a national figure in football, Swinney said his most natural sport as an athlete was baseball and his favorite was yet another sport.

“I was kind of a gym rat and loved basketball,” Swinney said.

Swinney grew up a fan of the Crimson Tide and wanted to attend the University of Alabama and pursue a career as a walk-on, or non-scholarship player, but he was not sure which sport.

He approached the decision logically.

“They didn’t give full scholarships for baseball, and in basketball there are only five guys on the court at a time. I felt like I had the best path in football.”

Swinney was able to walk on for the UA football team. He remembers well the first game he had the opportunity to play in—against Southern Miss in 1989—but Swinney’s passion for the game and sports in general went beyond playing time.

“I loved the first day I got to be part of the team, the first team meeting, the first practice,” he said. “My whole life I had been a big Alabama fan. I took it and ran with it. The friendships and the relationships were special.”

But then it came to an end—or so it seemed.

After earning a degree from the university, Swinney was completing an internship in the spring of 1993 and had been offered a job in Birmingham in the health care management field.

He went out and watched the Alabama football team practice, and then-assistant coach Woody McCorvey said a graduate assistant position might be available if Swinney was interested.

“I had never really thought about [coaching],” Swinney said. “That was the first time I hadn’t been part of a team, and coach [Gene] Stallings said, ‘You start in July.’

“It was easier for me to call and turn down the job I had been offered.”

Swinney said he “justified” his decision by working toward an MBA while he was coaching, but he knew there was more to it than that.

After Swinney finished his master’s degree requirements, he was prepared to again seek a job in the medical field, but Stallings shuffled is staff in order to offer Swinney a full-time position in 1996.

Swinney said he “made a conscious decision to not make any money” but thought he was “rich” with his initial salary of $38,000.

‘I make a point to make sure we have fun’

Swinney was dismissed along with all of former coach Mike DuBose’s staff in early 2001, but after holding a real estate job for a time, Swinney was hired to coach receivers at Clemson in 2003.

Swinney was named Clemson’s interim coach upon the firing of former coach Tommy Bowden in October 2008. After a strong finish to the season, including a win over rival South Carolina, Swinney was named the full-time coach in December 2008.

Clemson fell to Alabama, 45-40, in 2016, but Swinney was still named national coach of the year by several organizations.

William Christopher Swinney’s name “Dabo” was given to him by his older brother, in trying to refer to “that boy.”

But Swinney himself is the one who has become known for introducing colorful quotes to the college football lexicon. An example, delivered after an emotional 24-22 win over Notre Dame in 2015:

“It ain’t always perfect, but what I told them tonight was, ‘Listen, we give you scholarships, we give you stipends and meals and a place to live. We give you nice uniforms. I can’t give you guts, and I can’t give you heart.’ Tonight, it was B.Y.O.G.—bring your own guts. And they brought some guts and some heart, and they never quit until the last play.”

Perhaps no one was surprised when Swinney was caught on camera dancing the “Whip/Nae Nae” in the locker room later.

“I make a point to make sure we have fun in our program,” Swinney said. “We’ve tried to create a culture that it’s OK to have some fun.”

‘We’re going to get this done’

Swinney came back to Pelham to speak at a football banquet when Hayes’ father, Bobby, was leaving the mayor’s office after many years. Swinney calls Rick Hayes’ mother every Thursday before games on Saturday.

Hayes said he has lots of stories about Swinney, but many people do.

“He’s just that way,” Hayes said. “He has like 30 best friends because he’s just that way. No matter where he is or who he’s with or what he’s doing, he’s always going to be that ol’ boy from Pelham, Alabama.”

Hayes said he is not surprised by Swinney’s success.

“He is immensely positive and always has a smile on his face,” Hayes said. “That is the foundation for the program: Work hard, do your job, be the person you need to be first and foremost, and be positive. We’re going to get this done.

“That was the mentality we all learned as kids, but it’s hard this day and age to believe that and act that way.”

‘A great experience here at Clemson’

The things about Swinney’s job that makes him happy are the things that he enjoyed about athletics back at Pelham High School and throughout his college career.

“I enjoy being with the players every day,” he said. “I love the preparation. I wanted to stay a part of the team. I love to compete. The relationships with the coaches and players, it’s just special. That’s what I loved the most when I first got in and that’s what I love now.

“I love gameday. I love to prepare and grind and get a gameplan together.”

But there is much more to being the face of a major college football program than there was to that graduate assistant position Swinney first accepted.

“There has always been pressure (to succeed), but where we are now, it’s just unbelievable—the scrutiny, the amount of pressure, the things to deal with and the world the players are growing up in,” Swinney said.

Swinney said he has been successful in the face of such pressure and demands with a measured approach.

“I’ve been able to surround myself with good people—great young men and making the right decisions about my staff,” he said. “Then you have to be able to articulate a vision for the program and get people to buy into that.

“I’ve had great support from the administration for how we want things to be, and we’ve just tried to create a culture one day at a time, one graduate at a time. Day 1, we laid out a vision of the program, and we re-establish our core values every year.”

Swinney said his primary goals are for players to graduate and leave the program equipped with the skills they need to succeed in life, and to win a championship.

Of the 135 seniors since Swinney has been coach at Clemson, 129 have graduated, he said.

“These kids are having a great experience here at Clemson, and they can’t wait to come back,” he said.

Swinney is having a great experience at Clemson, too, but those who grew up with him know he will always be an “ol’ boy from Pelham” at heart.

By ALEC ETHEREDGE | Sports Editor In the most recent Southeastwrestling.com rankings for Alabama’s 1-7A Classes, Oak Mountain and Thompson... read more