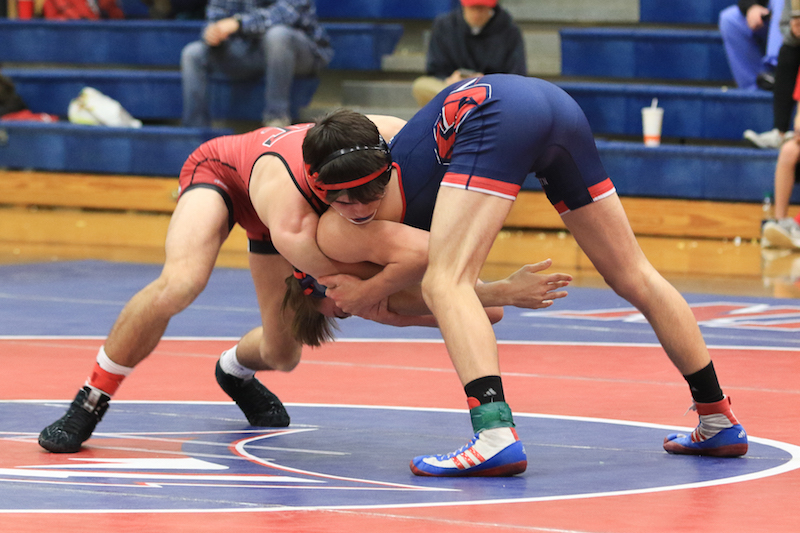 Thompson and Oak Mountain faced off on Jan. 4 and now the two are ranked in the top 6 of the Class 7A state rankings. (For the Reporter/Dawn Harrison)

In the most recent Southeastwrestling.com rankings for Alabama’s 1-7A Classes, Oak Mountain and Thompson were the only teams to garnish the honor of a top eight spot in the rankings. Both represented Shelby County well at the state meet last year as the Eagles brought home a second place finish and although the Warriors were denied their first state championship in six years, they still brought home a third place finish.

This season, both of those teams have picked up right where they left off. In the rankings released on Jan. 8, Tompson came in at the No. 2 spot in Class 7A with 81 points as they trail only No. 1 Vestavia Hills (126 points) in the rankings. Oak Mountain got 66 points, which was good enough for the No. 6 spot in Class 7A. The Spain Park Jaguars also got some recognition as they have been good enough this season to receive an Honorable Mention nod.

The Warriors took down both Oak Mountain and Spain Park the week of Jan. 2 to show their deserving of the high praise. In that same week, the Eagles took down Spain Park with relative ease, 51-19.

No other teams were able to pick up a top 8 spot in classes 1-6A, but Chelsea and Helena both picked up Honorable Mention spots in the 6A classification.

Sam Latona is not only one of the best wrestlers in the state, but the country right now. Wrestling in the 106-pound weight division he recently cracked the top 20 in a national ranking and is No. 1 in Class 7As 106-pound division boasting a 47-1 record on the season as a sophomore.

Also a sophomore, Chandler Akins is the second ranked wrestler in the 113-pound weight class. He has a record of 40-10 so far this season.

Gabe Hixenbaugh, a third sophomore ranked for the Warriors, is the No. 1 wrestler in the 126-pound classification. Hixenbaugh holds a record of 48-4 and a win percentage of 92.3.

The last ranked individual wrestler in their respective classification is veteran senior Jacob Megois who is ranked second in the 138-pound division with a 34-18 record.

Cole Thomas, a sophomore for the Eagles, holds an 11-4 record this season and is ranked at the No. 5 position in the 113-pound weight class.

Senior Blake Randle has been steady for Oak Mountain all season and is ranked second in the 132-pound division with a current record of 21-4.

Carson Lester, another senior, is ranked fourth in the 138-pound classification after jumping out to a 21-6 start on the year.

Another wrestler coming in at the No. 4 spot was Brett Cruce in the 145-pound weight division. Cruce has a current record of 6-4 on the year.

Barrett Blakely, the last ranked for the Eagles and the fifth overall, might be the best overall guy on Oak Mountain’s team. He came in at the No.1 position in the 160-pound division after posting a 27-2 record to date.

Manny Allan, perhaps the best wrestler in the state right now, has started the season off on a 28 match win streak as he is off to a 28-0 start on the season. He came in as the No. 1 wrestler in the 195-pound weight classification even though he has wrestled in the 220-pound much of the season.

The Hornets had two wrestlers ranked in their respective weight classes of the 6A top five. Brantley Ledbetter, a junior who wrestles in the 113-pound division, came in as the No. 1 wrestler in that class after a 22-4 start to the year. Sam Ingram, a sophomore, was ranked fifth in the 160-pound weight class while holding a 22-3 record.

Alex Montgomery, a senior for the Panthers, is at the 10-1 mark on the season and is ranked fourth in the 182-pound weight class of 6A.

Junior Alex Miller is ranked second in the 132-pound divison and holds a record of 27-4.

William Cummings has gotten off to a 24-4 start and is ranked No. 3 in the 152-pound classification.

Young Nathan Dunaway, an impressive freshman, is 29-4 on the season and ranked third in the 170-pound division.

Classes 1-5A only had one individual ranked and that was Shelby County’s Denver Wages, who grabbed the No. 5 spot in the 220-pound classification after posting 9-1 record on the season.