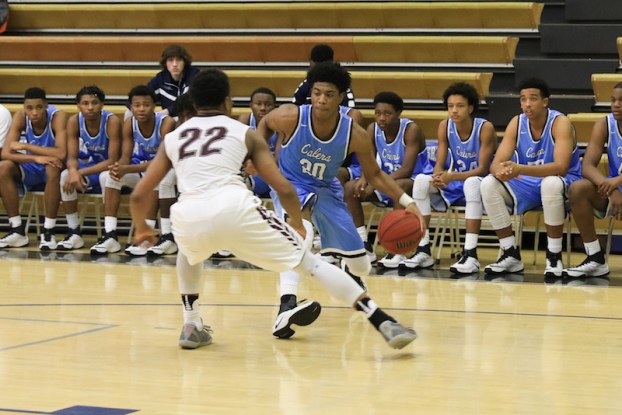 Calera took down Jemison on Tuesday, Jan. 10 to move to 4-0 in area play and one win away from locking up the title. (For the Reporter/Dawn Harrison)

CALERA – Calera boys’ basketball bounced back from a pair of losses at the Jefferson-Shelby Hoops Classic to run away with an 85-51 home victory over the Jemison Panthers on Tuesday and improve to 4-0 in Class 5A, Area 6.

“Right now we’re playing well and reaping the rewards of our guys staying after it and staying the course. I’m happy for my guys that they’re playing really well,” said George Drake, Calera head coach.

The Eagles took an 18-15 lead in the first quarter but exploded for a 30-point second quarter to go into halftime up 48-32. Tariq Wright and CJ Lewis combined for 16 of the Eagles’ second-quarter points. Calera held Jemison to only 19 points in the second half.

“Jemison is a very good coached team. They scored the ball and did some things offensively at will in the first half. It was uncharacteristic of our guys. We did a poor job defending them,” Drake said. “We started to defend better in the second half. That was more like us, keeping the ball in front of us.”

Jemison will host Marbury on Thursday to likely decide the No. 3 and No. 4 seed in Area 6.

By GRAHAM BROOKS / Staff Writer HELENA–Alex Reese is back. Pelham’s sensational senior forward has been injured for most of... read more