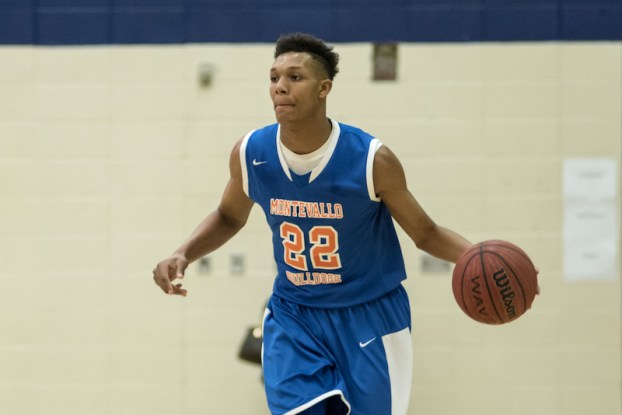 MONTGOMERY ­– The Montevallo Bulldogs traveled an hour due south on Interstate 65 Tuesday, Jan. 10 to face off against area foe Montgomery academy. Montevallo came into the game having won their first area game of the season over Southside-Selma back on Dec. 13, and were looking to get off to a 2-0 start in Class 3A Area 5.

It was a tough close battle for the most part, but thanks to some defensive pressure in the second half and a third-quarter run, the Bulldogs were able to escape the Eagles with a five-point 65-60 win.

The first half saw a high scoring affair, but a lot closer of a game than Montevallo (11-4, 2-0) wanted. Both teams started a little bit slow in the first, but battled to a 12-12 tie.

The offenses picked up the pace in the second quarter, and the defenses didn’t look as sharp. Montgomery-Academy put up 19 points in the frame to Montevallo’s 18 as they took 31-30 lead after the first 16 minutes of action.

Bulldogs head coach Greg Dickinson wanted his defense to step up and made sure the right adjustments were discussed during the halftime break to do just that.

Come the third quarter, the defense turned up the intensity immensely as they forced the Eagles to take contested shots and turned turnovers into easy fast-break scoring opportunities. Montevallo’s offense continued to play well as they went on to outscored Montgomery 21-14 in the quarter to storm in front and take a 51-45 lead.

A six-point cushion was all Montevallo needed heading into the fourth even though the offense slowed the pace. After scoring 39 points combined in the previous two quarters, the Bulldogs only put up 14 in the fourth as they were outscored 15-14, but that still gave them a five-point advantage when the final buzzer sounded.

The win moved Montevallo to 11-4 on the season as they have cemented themselves as one of the better teams among the 3A ranks.

By Chris Megginson | For the Reporter CALERA – Calera boys’ basketball bounced back from a pair of losses at... read more