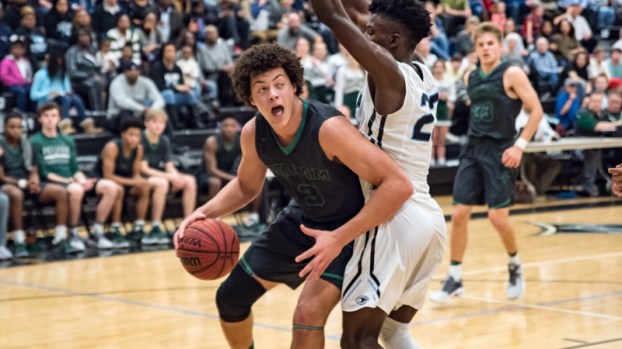 After missing a significant portion of the season due to injuries, Pelham forward Alex Reese returned on Jan. 10 and finished with 26 points and 10 rebounds as the Panthers got a big area win against Helena on the road. (Reporter Photo/Keith McCoy)

HELENA–Alex Reese is back. Pelham’s sensational senior forward has been injured for most of this season but had an immediate impact in his first game back for the Panthers as he finished as the game’s leading scorer with 26 points and 10 rebounds to help lead Pelham to a crucial 47-41 road victory against Helena in the first area game of the season on Jan. 10.

Pelham was desperately hoping that Reese, as well as point guard Justin Allison would be back and healthy for area play and Reese showed no signs of slowing down from the opening tip.

Helena jumped on Pelham early to start the game. The Huskies raced out to a quick 9-1 lead as Nate Andrews drained two 3-pointers to swing all the momentum to the home team.

Pelham head coach Joel Floyd called an early timeout to try and settle his team after a sloppy start. Shots weren’t falling and Allison picked up two quick fouls in the first quarter.

The timeout proved to be effective as Pelham cut Helena’s lead to 13-7 at the end of the first quarter after Reese converted an and-one under the basket with seconds remaining.

Pelham did a better job on the defensive end of the floor in the second quarter and climbed back into the game despite not having Allison as a scoring threat because of foul trouble.

Reese, along with Panthers’ forward Chris Brown, pulled Pelham to within three points of Helena at halftime as the Huskies led 21-18.

The third quarter provided the most entertaining basketball of the night as both teams traded shot after shot but Helena had no answer for Reese.

Pelham outscored Helena 15-6 in the quarter, as Reese accounted for nine of the 15 points in the third period while also causing Helena to force shots on the offensive end.

“This is a playoff type atmosphere for both of us,” Floyd said. “Tremendous job by both teams who went out and made plays. During that little stretch of the third quarter where we’re making shots and they’re making shots and it’s back-and-forth, both teams are playing great defense but it was just kids making plays. That was a great high school basketball game.”

Helena has a tremendous scorer as well with Jon Brown and Brown continued his hot streak of finishing in double-digits, as the senior finished with 15 points but it wasn’t enough to propel the Huskies to a win.

Brown was held scoreless in the third quarter but he showed his leadership in the final quarter scoring eight of his 15 points in the final eight minutes.

When it seemed like the Huskies would inch closer to taking the lead in the fourth quarter, Pelham had an answer.

Allison was held in check most of the night but drained a key 3-pointer near the end of the game as four of his seven points came in the final period.

Reese also added eight points in the fourth quarter and Pelham hit free throws late in the game to seal the 47-41 win to move to 1-0 in area play.

“Reese was really, really good. He was 10-14 from the field and made big shots when they needed big shots,” Helena head coach Chris Laatsch said after the game. “I thought he was really, really good and they guard really well. We didn’t get anything easy and we had to work for everything. I thought Reese bothered a lot of shots by the rim. I thought he was in our heads and made us miss some easy shots. He showed why he’s an Alabama signee.”

Pelham now holds the upper hand in an area that includes the Panthers, Helena and Chelsea where each game is crucial for postseason aspirations.

“It’s extremely important to get that first one in area,” Floyd said. “It’s a three team area and it means everything in the regular season this year so we couldn’t be more pleased to go out and just find a way to scrap and claw and get a win on the road.”

By GRAHAM BROOKS / Staff Writer HELENA–Led behind a record-setting performance by Helena forward Jon Brown and with a spot... read more