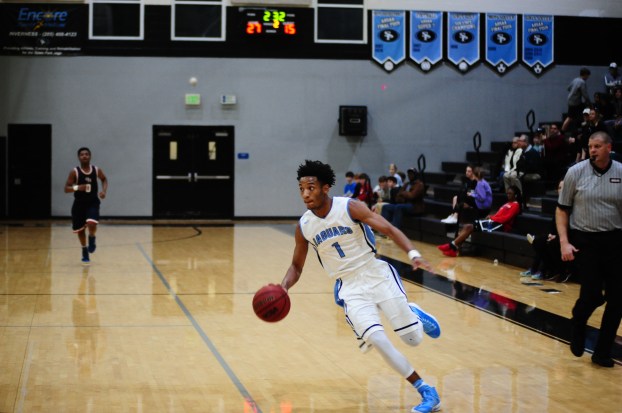 Jamal Johnson drives to the rim where he was eventually fouled. Johnson led all scorers with 25 points in the game. (Reporter photo/Alec Etheredge)

HOOVER – High school basketball in Alabama’s Class 7A Area 6 is equivalent to SEC football, ACC basketball and Ivy League brains. Hopefully that gets the point across on how tough it is to win that area of basketball in the state.

Two of the four teams are ranked in the 7A top 10 in Mountain Brook and Huffman, and the other two Spain Park and Oak Mountain aren’t far behind. The Jags have Memphis signee Jamal Johnson who is scoring close to 30 points per game and the Eagles boast a 13-6 overall record heading into Tuesday, Jan. 9, the first night of area play in the division.

Oak Mountain (13-7, 0-1) traveled a mile or so up the road to take on Spain Park (7-11, 1-0) on the hardwood in the all-important first area game.  The Jags used several runs and a strong performance from Johnson in the game to run away with the game as they took down the Eagles 61-37 and moved to 1-0 in the area with Mountain Brook who beat Huffman on Tuesday as well.

The game started out with a lot of intensity as both student sections were chanting back and forth at each other and the players were going all out. The two teams battled over the first few minutes to a 4-4 tie, but the Jags went on a 10-0 run over the next several minutes to jump up 14-4. The Eagles ended that run with a 3-pointer from Andrew Hieberger and ended the quarter on a 5-3 run to trail 17-9 after one.

Early in the second quarter it was apparent after a possession where Oak Mountain got several offensive rebounds and good opportunities before Chris Mayweather finally put it in the basket that the Eagles were having to work hard for points, while Spain Park was getting baskets at ease as Trey Johnson hit easy back-to-back baskets in transition.

Mayweather answered by hitting back-to-back baskets for Oak Mountain as he was the Eagles’ sole source of offense in the first half. The Eagles had cut the lead to nine at 24-15, but Spain Park ended the second on a 9-4 run, seven of which was scored by Jamal Johnson who caught fire in the quarter scoring 11 points. He had helped the Jags build a 33-19 halftime lead.

Spain Park came out in the third and showed they weren’t messing around as they hit a three on the opening possession and proceeded to continue their run, which ended up being extended to 17-2 dating back to the second quarter.

The Eagles spent the entire quarter trying to claw back into the game having trailed by as many as 25 at one point, they were able to cut the lead to 18 heading to the fourth down 48-30 after Will Stephenson hit a three at the buzzer off of a tipped pass with one second left from well beyond the three-point line.

The momentum carried over to the fourth for Oak Mountain as they eventually ended up on the right end of a 9-2 run, which cut the lead to 16, but Spain Park’s big lead was insurmountable. The Jags immediately answered with a 9-0 run and closed the game on an 11-3 run to win by the final score of 61-37.

Jamal Johnson led Spain Park with a game-high 25 points going 8-10 from the free throw line and hitting eight field goals. Oak Mountain was led by 12 from Chris Mayweather, 10 of which came in the first half, and the Eagles leading scorer, Will Stephenson, was held to just seven points in the game.