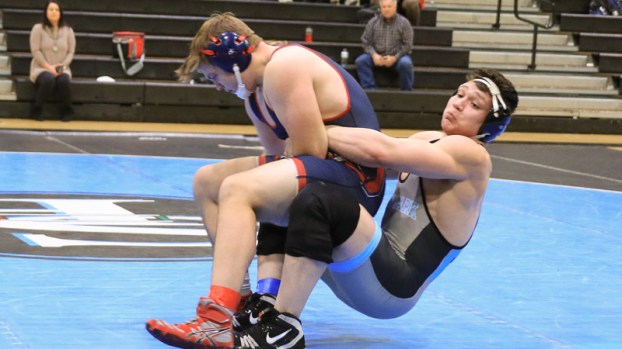 Manny Allan takes down the Oak Mountain wrestler with a strong move in a recent meet. (For the Reporter/Dawn Harrison)

HOOVER – Manny Allan’s unbeaten streak may be the focus of the present, but the Spain Park High School wrestling team also has reasons to be optimistic about the future.

Allan is the only senior on the squad, and there are only two juniors, so the remainder of the 22 wrestlers are sophomores and freshmen.

Any success the Jaguars have this season only further raises hopes for the next few years.

Coach Ryan Thompson said the team’s younger wrestlers have improved over the course of the season, and now their confidence is growing also.

“This is the first time they’ve been able to bring home any kind of team hardware,” Thompson said.

Thompson, who followed his brother Matt as head coach four years ago, said the team’s success often comes down to having enough wrestlers to fill all the weight classes.

There are 14 weight classes, and SPHS has wrestlers in 11 of them.

Thompson said a problem in the past was not having a program feed into the varsity squad.

“Our main issue was we didn’t have a wrestling guy at the middle school as far as a coach,” Thompson said.

“It’s a numbers deal,” Thompson said. “So much of it is kids sticking with it.”

Thompson said he would like to get to 40 wrestlers on the varsity team.

Allan, who wrestles at 195 pounds, has been the star this year. He’s won 26 consecutive matches—dating back to 2015 because of an injury that prevented him from competing last season—and set the school record with 123 takedowns this season with about half the season still remaining.

Allan qualified for the state tournament during his freshman season, his last full campaign.

Other top wrestlers for Spain Park include Jack Rivers at 106 pounds, and Gaven Pudlik at 126 pounds.

Rivers, who qualified for state last year, and Pudlik are both sophomores.

Any Jaguars who hope to qualify for the state tournament will have to beat the best. Five of the top teams in the state wrestle in Spain Park’s section: Hoover, Thompson, Oak Mountain, Prattville and Central Phenix City.