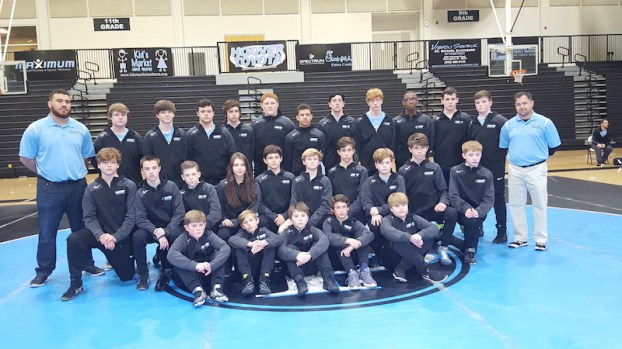 HOOVER – After finishing sixth in last year’s Metro Wrestling Championships, the Berry Jaguar wrestling squad has been determined to get back and improve under second year head coach Rick Smith.

That sixth place finish might have been middle of the pack, but the Jags have used that as momentum to propel themselves toward improvement during the 2016-17 season.

The strides are already being made as the Jags aren’t only off to a 10-4 start, but on Jan. 5 they did something they haven’t done in close to 10 years. On that Tuesday night, Berry beat Oak Mountain 46-24, which avenged an earlier loss to the Eagles on Dec. 16 where they fell in a close match, 51-46.

“What’s interesting about that match is that it is the first time in many years, I heard 10, but that’s not verified, that a Hoover Middle school wrestling team has beaten Oak Mountain,” Smith said of his team’s accomplishment.

Oak Mountain tends to have one of the best high school wrestling teams in the state and are coming off of a year where they finished second at the state meet. All of the talent the high school gets starts at a young age as the middle school squad is also a perennial powerhouse.

The task was a big one for Berry, but they proved they can hang with the big boys as they continue to grow the program.

“This is my second year as head coach and we are in the process of building a championship wrestling program both at Berry and Span Park,” Smith said. “Coaches Ryan and matt Thompson at Spain Park have been instrumental in helping with that process.”

It will take a lot to catch up with the powerhouses that are Thompson and Oak Mountain in Shelby County, but Berry and Spain Park are on the rise and threatening to give them a run for their money.

The Jags have several big matches over the next couple of weeks to prove themselves as they look build toward the postseason meets.

By ALEC ETHEREDGE | Sports Editor Just like the guys rankings, we’ve been on a month-long hiatus from receiving a... read more