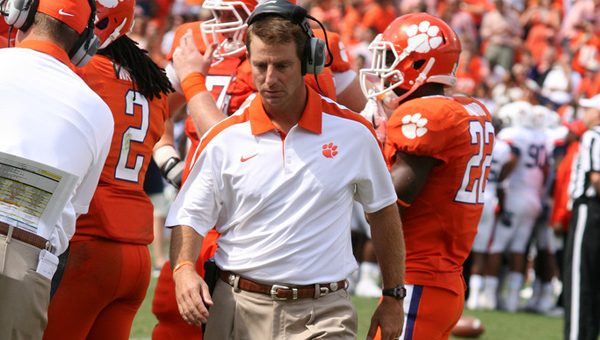 Important people in Dabo Swinney's life talk about what kind of person he is off the field. (File)

Beyond football: Phillips, Hayes talk about what kind of person Swinney is off the field

PELHAM – Reaching the pinnacle of college football isn’t a task that gets accomplished overnight. That kind of accomplishment is often years in the making and is reserved for only the best of the best.

This football season, the best is Clemson. Head coach Dabo Swinney’s success didn’t happen overnight and he didn’t accomplish his goals alone. In his interviews he is quick to give credit to others when it’s due. And off the field, there are others who are credited with having an everlasting impact in his life.

One of which is former Pelham Mayor Bobby Hayes, and another is Jim Phillips, or Coach Phillips, as he is better known.

Hayes has known Swinney since before he could talk. When Hayes first met Swinney he was in a play pin at a baseball park in Birmingham.

“He was just a little guy, probably less than a year old,” Hayes said.

Swinney grew up being friends with Hayes’ children. Hayes said he thinks of Swinney as being one of his own.

“He had good parents, but he just needed a little extra help sometimes,” Hayes said. “We treat him just like one of ours. Every Christmas Eve, he’s at our house with his family. He usually calls late at night – that’s when he usually starts slowing down. He’ll catch us up on what’s going on with his kids and we just talk.”

Over the years Swinney has stayed close with a lot of people from Pelham and the people he played sports with. Hayes said that’s probably the thing he likes the most about him.

“In his interviews he always refers to Pelham,” Hayes said. “He never forgets where he came from.”

Phillips said Swinney is the type of person who can make friends wherever he goes and never dodges Clemson fans.

“He doesn’t do anything without being personal,” Phillips said. “Now it’s a two hour trip to Walmart to get Christmas lights. He still stops to sign autographs and to take pictures, and I’m always the picture-taker.”

Phillips said his relationship with Swinney grew stronger when Swinney lived with him for about three months when he was 15 years old.

“He went everywhere with us,” said Phillips who was married with one son. “His personality attracts people. If you’re down, he can sense it and he’ll make you start laughing. He has the ability to turn you all the way around.”

Swinney’s first time on an airplane was on a 10-day vacation with the Phillips family during the time he was living with them. They went on a cruise to Jamaica, Casa Mel, Mexico and St. Thomas in the Virgin Islands. Afterward they went to Sea World.

Now Phillips assists Dabo and the football team on the sideline during games.

“I’m basically Dabo’s go-to-guy,” Phillips said. “Whatever he needs me to do, I do it.”

Phillips said that mostly means floating back and forth to the defensive and offensive benches managing any issues that arise. He also helps the kicker warm up.

As Phillips thought back over the years he’s known Swinney, he said he’s proud of him for his coaching accomplishments, but he’s even more proud of the fact that Swinney is great person who is devoted to his family and is a man of God.

“Football is great, but it’s about being a good person,” he said. “Because of the kind of person he is, he was able to turn a football team into one big family. This season was all about love. That was his word this year.”

Perhaps one of Phillips’ best memories from the national championship game came at the end of the game, after they presented the AFCA National Championship Trophy.

“Dabo is looking out into the crowd and he glances over at me and motions for me to come up to the stage,” Phillips said. “Everybody was pretty emotional right after the win, but I was able to pull myself together. But when I got up to the stage he put his hand on my head, bent down to my ear and said, ‘I just want to thank you for everything and tell you how much I love you.’ Of course we both lost it and got emotional at that point.”

It was a moment that was captured in a picture by the team’s photographer.

“It’s just really amazing to me that in that moment, he wanted to thank me,” Phillips said. “His life is like a fairytale. With the way he started out and the adversity he faced, he still managed to become a successful man of God.”

Shelby County hosted their first public open house workshop on the preparation of a bicycle and pedestrian plan for the... read more