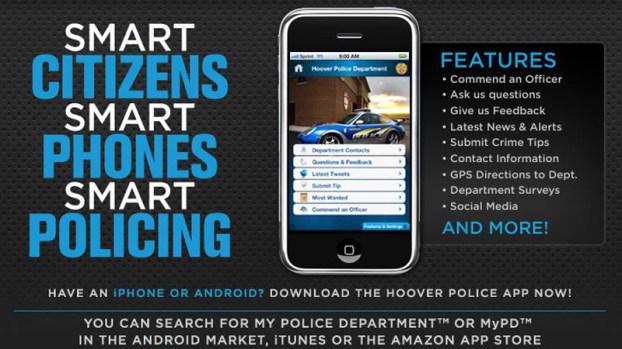 HOOVER – Hoover Police encourage residents to download and utilize a mobile app that they call a “one-stop shop” for information related to the department.

The app, called “MyPD,” connects users to the police department of their choice.

Hoover Police Department is one of only two in Alabama that uses the app.

Officer Brian Hale with HPD said the department is “constantly looking at ways to engage the public, whether it be updating our website to communicating information on social media.”

“This app provides one more avenue for HPD to be able to do that,” Hale said. “The fact is, most of us get our information using our smart phones or tablets. The app is a user- and device-friendly way to not only get general information about HPD but also to communicate with us.”

Features available through the app include the capability to commend an officer, offer other feedback, sign up for alerts for when the department releases information and view the city’s fugitive and sex offenders lists.

The app is free and available to both iPhone and Android users. Those interested should search for “my police department” in the Apple App store, Android Market, Amazon App Store or Google Play store.

After the app is downloaded, users can select “Hoover Police Department” as their home department.

Hale said one feature he thinks is particularly beneficial is the capability to submit an anonymous tip.

“The public acts as our eyes and ears out there, and we count on them to let us know when they see something suspicious,” Hale said. “Many times people don’t want to call us with information because they don’t want to bother us or they don’t want to be identified. Officers can’t be everywhere all of the time.”

Hale stressed that the app should not be used to report an incident that is occurring in real time. In such an instance, residents should call 911 for emergencies or the HPD Communications Center at 822-5300 for non-emergencies.

An example of a good use for the tip submission feature on the app is when a resident thinks there is drug activity in their neighborhood, Hale said.

“This app makes it simple, and it’s right at their fingertips,” he said.

By EMILY REED / Special to the Reporter The American Red Cross is encouraging individuals to give blood after experiencing... read more