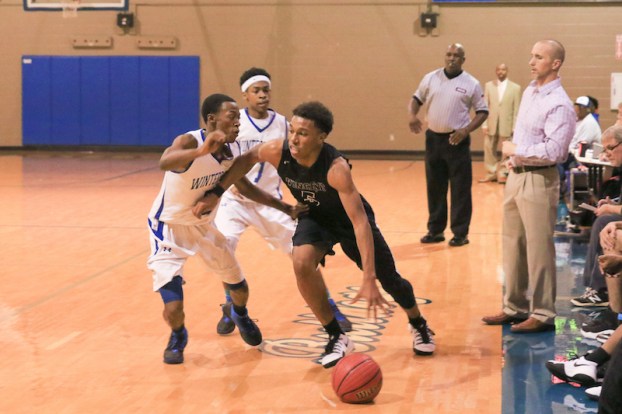 Campbell was on a roll during Vincent’s two games the week of Jan. 9 as he posted a combined 58 points and 14 rebounds. (For the Reporter/Dawn Harrison)

Stephen Campbell continued his impressive season this week for Vincent as he accounted for more than half of his team’s points in back-to-back wins for the Yellow Jackets to improve their record to 14-8 (2-0) on the season.

On Tuesday, Jan. 10, Campbell picked up a double-double after posting a game-high 30 points and finishing second in the game with 11 rebounds to lead his team to am 45-40 win over Ranburne.

The win was key for Vincent as it moved them to 2-0 in area play, and in just a three-team area, with Ranburne and Woodland, getting ahead of the curve gives them a high likelihood to win Class 2A Area 10 now that they have wins over both teams.

Campbell took 23 shots in the game and made eight of them while going 13-15 from the free throw line. Only three other players scored for the Yellow Jackets as Campbell had all but 15 of his team’s points.

In game two of the week, Vincent took on BB Comer for the second time this season after easily handling the Tigers 65-37 the first go around. Campbell picked up right where he left off as he finished with more than half of the Yellow Jackets’ points again.

This time the senior leading point guard posted 28 of Vincent’s 50 points in the game. Campbell shot 50 percent from the field (9-18) and 50 percent from behind the arc (4-8), while going 6-9 from the free throw line.

Even more impressive than Campbell’s game may have been the intensity the Yellow Jackets came out and played with in the first quarter. To say Vincent started the game on a run would be an understatement, they came out hotter than a humid summer Alabama day.

They used five first-quarter turnovers and turned them into five points, while also shooting 71 percent from the field and 50 percent from deep to propel themselves to a 20-2 run in the first 8:00 of the game.

BB Comer made adjustments and outscored Vincent 25-17 over the next two quarters to trail 37-27 heading into the final quarter of play. In the fourth, the Yellow Jackets made all three of their field goal attempts and 7 of their 12 free throws to seal the 50-39 win.

By ALEC ETHEREDGE | Sports Editor Now that the new year is upon us and the Christmas holiday is part... read more