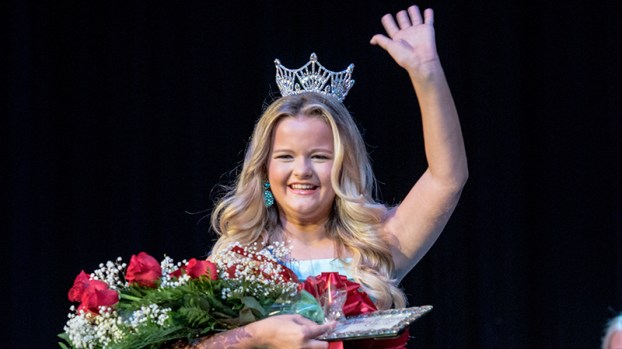 HELENA–Helena Middle School seventh grader Parker Wilson captured another crown on Oct. 30, 2016, during the Miss Alabama Jr. High Pageant and now she will turn her attention to preparing for a national pageant this summer.

At 12-years-old, Wilson has already won and competed in several pageants and can now say she is the Miss Alabama Jr. High America 2017 winner.

The pageant was held at the Bama Theatre in Tuscaloosa where Parker competed against four other girls who ranged in age from fourth to eighth grade.

Parker said she spent months preparing for the pageant, which included an interview, evening gown and fun fashion wear.

“I was so excited and happy and almost cried,” Parker said of how she felt after being crowned the winner. “It was a great experience and I can’t wait to compete at nationals and hopefully compete for the title.”

Another component of the Miss Alabama Jr. High America Pageant involved the opportunity for girls to volunteer for an organization called BRAVE.

BRAVE stands for “building respect and values for everyone,” and Wilson has spent time speaking on the importance of anti-bullying by traveling to different schools in the area before she heads to Nationals.

In the next few months, Wilson will be preparing for the Miss Junior High School America Scholarship Pageant where she will be competing against other girls from across the U.S.

“I will be focusing on finding the right dress and outfits that I feel my best in,” Parker said. “I will have a lot of coaching sessions and mock interviews to prepare also.”

By ALEC ETHEREDGE | Sports Editor COLUMBIANA – Arena professional football is on its way to Columbiana as the Alabama... read more