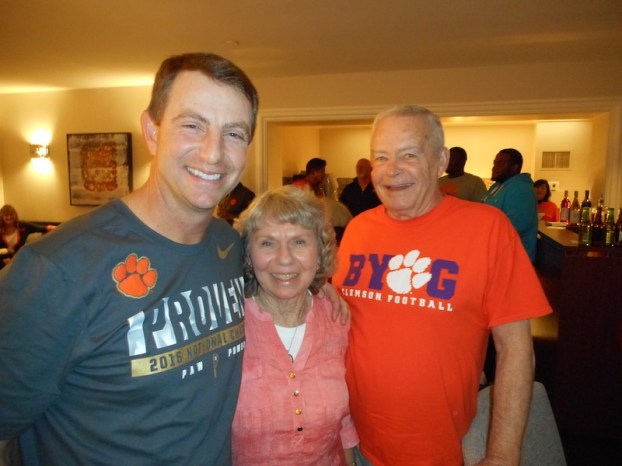 Clemson Tigers head coach Dabo Swinney is pictured with Judy and Bobby Hayes of Pelham at the victory party after the game. (Contributed)

My long-lasting connection to the Swinney family and Kathleen Bassett Swinney’s family allows me to know that when Dabo says, “Football is a game. Life is short. You’ve gotta have some fun,” he is sharing his truth—and his family experience. Both sides of this family have known loss.

This collective family has also experienced quite a few joys outside of football including long-awaited arrivals, second chances and great goals realized. What is it about this family that allows them to rise above? Dabo Swinney says it best when he reveals his half-time comments to his team.

“The difference in the game is gonna be love. My word all year has been love. I told my guys, ‘Tonight, we’re gonna win it because we love each other,’” said Swinney.

Sitting in the stands with Swinney’s family, good friends and my sister-in-law Joni Hayes, my mom’s retelling of the game’s ending topped any sportscaster’s report.

“We saw the end of the game on the big screens under the stands. We started screaming when Clemson made that final touchdown and Kathleen said, ‘Hurry, let’s get out there!’ We all ran on the field! They made us go to the sidelines because there was one second left on the clock. We were on the sidelines for the victory!”

“It was our night; it was our time. This has been a process in the making for us,” said Swinney.

May Pelham always be a place where kids grow up feeling loved because—no matter what the score is—love always wins.

Grades rule, even on the field