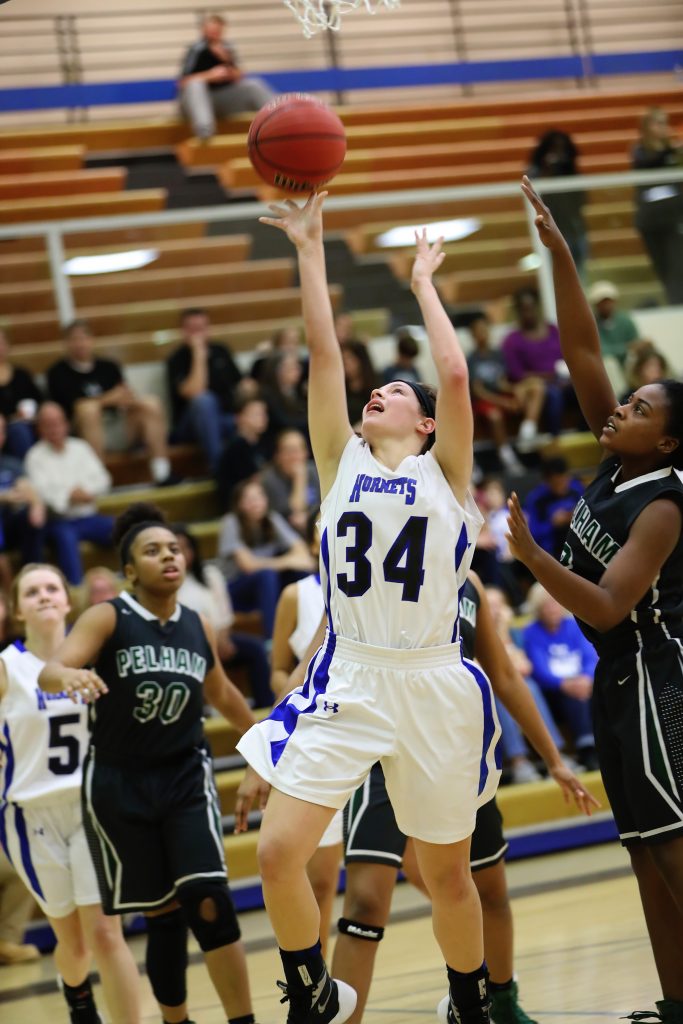 Michaella Edwards, No. 34, shoots a layup after getting past the Pelham defenders. She led all scorers with 36 points in the game. (For the Reporter/Cari Dean)

CHELSEA – Chelsea’s girls basketball team won six games all of last year and struggled mightily to put together any sort of momentum. This year things have taken a turn for the best as they have now already doubled last year’s win total.

That improvement isn’t all the Lady Hornets are hoping to accomplish, however. An area title is very much in reach and after a 58-40 win over area 8 foe Pelham on Friday, Jan. 13, Chelsea is off to the 1-0 area start to achieve that goal.

The Hornets have been led by sophomore Michaella Edwards all season and were again in this one as she posted 36 points and eight rebounds in the contest, but they also had six other girls contribute with points, which was one of their best team performances of the season.

Early in the game, both Pelham and Chelsea struggled offensively, but three minutes in Chelsea used its tough defensive effort to start the scoring as Allie Miller forced a turnover, which led to a fast break and assist to Edwards for the first basket of the game.

This trend continued much of the quarter as the Hornets started on a 12-2 run behind 10 points from Edwards in the quarter. The Panthers hit a 3-pointer at the buzzer to end the run and trail 12-5 heading into the second.

Not much changed in the second quarter as Chelsea started the frame on another 10-2 run to extend their lead to 22-7. Miller and freshman Suzanne Ridgeway had good chemistry in the quarter as Miller had several nice assists and Ridgeway seemed to be in the right place at the right time. 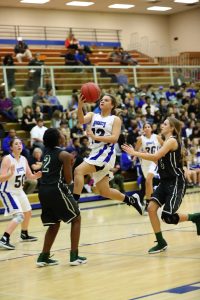 Allie Miller drives to the basket and lays it in after one of several fast-break opportunities she created. (For the Reporter/Cari Dean)

Behind Ridgeway’s six and Edwards’ seven, Chelsea had built a 28-13 halftime lead.

Pelham came out in the third and showed that they had a little fight left in them. Trailing 34-16 at one point, the Panthers went on a 5-0 run to get within 13 points. They didn’t get any closer than that in the quarter as Chelsea maintained around a 13-point advantage and had a 36-23 lead after three.

Jamila Wilson, who had a great third quarter with 10 points for the Panthers, started the fourth off with two free throws to bring Pelham to within 11 and their closest deficit since early in the game.

That’s as close as Pelham got in the game, however, as the Hornets answered with a 6-0 run to jump up 42-25. At one point, Edwards had five straight points for Chelsea, which put them up 49-28 with just a couple of minutes remaining. The Hornets were able to maintain that big lead the rest of the way to win by the final of 58-40.

Edwards’ 36 points was a game high as she shot 63 percent from the field (10-16) and 88 percent from the free throw line (15-17). No other Chelsea player had more than Pressley Rains’ seven points, but Miller made contributions with five rebounds, five assists and four steals. Wilson led Pelham with 17 points in the game.

By BAKER ELLIS / Staff Writer NORTH SHELBY – Hunter Wright got into running the same way most boys get... read more