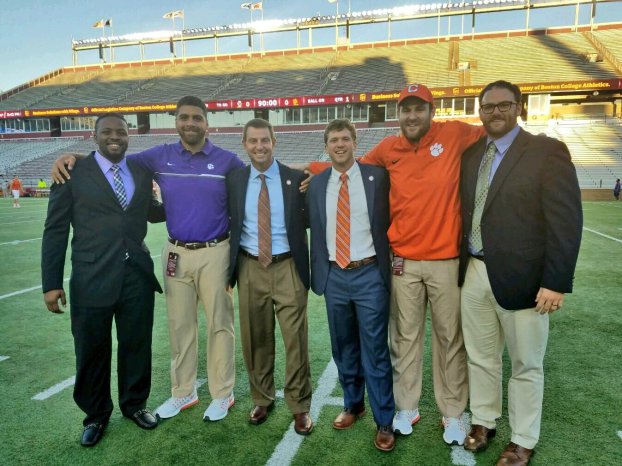 Tyler Grisham, middle right, is pictured with former players that were part of Swinney’s first win as a coach, as well as the head coach himself. Several of those players are now coaches under Swinney as they try to follow in his footsteps. (Contributed)

Dabo Swinney is coming off of his first National Championship win as a head football coach at the University of Clemson after his Tigers took down Nick Saban and Alabama, Swinney’s alma mater.

As has been made popular lately, Swinney grew up in Pelham and is sort of a local hero to that city, especially at this point in time. His players are obviously grateful for what he has done to help them get to college football’s biggest stage on a national level, but Swinney’s reach extends a lot further than simply winning a title with the Tigers. 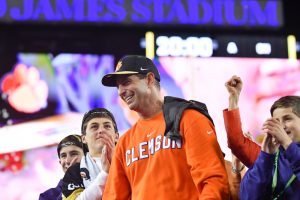 Swinney after the National Championship victory over Alabama. (Contributed)

Swinney, who graduated from Pelham High School in 1988, has never forgotten where he came from as he has kept many close friendships locally that you have probably read about by now.

Not only has he kept those friendships, but he has used his past as an example for others aspiring to be like him. As an “ol guy from Pelham” Swinney got his start as a graduate assistant at Alabama in the mid 90’s.

He went on to become an assistant coach for the Tide, but was fired in 2001 with all of Mike Dubose’s staff. He was finally hired again in 2002 by the Clemson Tigers and Tommy Bowden. It was a tough battle, but he eventually made his way to the top becoming the Tigers’ head coach and now to back-to-back national championship appearances.

He hasn’t forgotten how hard his climb was and he wanted to do his best to give other local Shelby County athletes and coaches a chance to succeed in their careers by giving them a start.

Joe Craddock is the prime example of how far Dabo’s arms have extended over the years.

Craddock, a graduate of Briarwood Christian School, is currently the offensive coordinator at Southern Methodist University (SMU) in Dallas, Texas.

After graduating from Briarwood in 2003 with a 5A state championship, Craddock went on to play football at Middle Tennessee State in Murfreesboro, Tennessee. After finishing up his playing career he headed back to North Shelby County to become the offensive coordinator for the Lions. 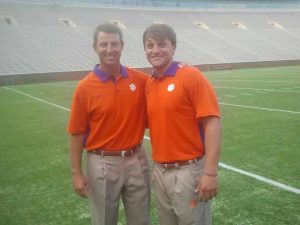 Joe Craddock, now the offensive coordinator at SMU, is pictured with Swinney when he was an assistant with the Tigers. (Contributed)

All it took was Craddock leading a high powered offense to a runner-up finish in the 2010 state championship and a 25-4 overall record over the 2010-2011 seasons before Swinney came calling.

Swinney hired Craddock as an offensive player development coach starting in 2012. This is the start that launched his career and after two short seasons with the Tigers he was promoted and to graduate assistant and worked closely with the quarterbacks including Deshaun Watson, whom Craddock helped form into Clemson’s best quarterback in recent memory.

After doing so, he impressed Chad Morris enough, who was named head coach at SMU in December of 2014, that Morris decided to hire Craddock as his offensive coordinator and quarterbacks coach, a job he still holds to this day, thanks to hard work and the opportunity he was given by Swinney.

Grisham was a star wide receiver on one of Spain Park’s first few football teams. He was named as an All-State player back then and also made the Alabama/Mississipp All-Star football game.

He graduated from Spain Park in 2005 and went on to play wide receiver for the Clemson Tigers from 2006-2009, which meant he would be working closely with the Swinney, who was the assistant head coach and wide receivers coach at that time.

After Grisham’s collegiate career, he was signed by the Pittsburgh Steelers to a free agent contract where he played for two years before signing with the Denver Broncos for one year in 2012.

Once he was cut by the Broncos his career starts to become eerily similar to Swinney’s.

Grisham became a management trainee and sales account manager with U.S Lumber where he stayed for about a year-and-a-half before his former head coach gave him a call. He offered Grisham a graduate assistant job with the team where he would, like Swinney, be coaching receivers.

He accepted that job in July of 2014 and started to attend Clemson again as he worked toward his master’s degree in human resource and development. Grisham has already been promoted to player development and is an assistant for offensive analysis and research development.

His path is very similar to that of his former mentor, Swinney, and both he and Craddock are young, prime examples of Swinney not forgetting where he came from and how he got to where he is now.

Michaella Edwards, No. 34, shoots a layup after getting past the Pelham defenders. She led all scorers with 36 points... read more