Grades rule, even on the field

“Logan Burnett is going to a bowl game,” my husband/in-house sports reporter said.

“Several teams have the same win-loss record so bowl decisions are determined on APR.” 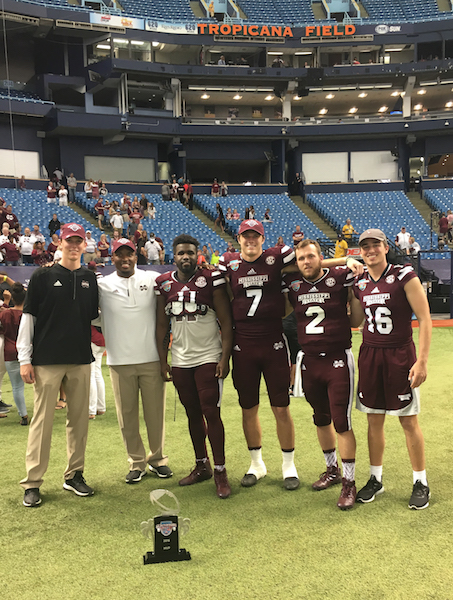 Logan Burnett poses with all of the Mississippi State quarterbacks and Coach Johnson. (Contributed)

How refreshing! Determining which teams enjoy bowl games based on hard work in the classroom reinforces the scholar in the scholar-athlete equation.

Trying to plan a family Christmas with a son who is a college football player is challenging.

“Looks like we’re headed to St. Petersburg for Christmas,” Rebecca Burnett said. “The game is Dec. 26.”

Hailing from West Virginia herself, with her husband’s family in Kentucky, Burnett is accustomed to Christmas traveling. Heading to a warm climate was unusual.

Since Burnett’s son accepted a preferred walk-on spot at Mississippi State this year, joining his friend and former Pelham Panther teammate Braxton Hoyett, the Burnetts have done lots of traveling. When I spoke with Logan, I asked him about his team’s emphasis on grades.

“Our coaches are big on academics. We start most position meetings discussing upcoming tests and homework. Taking care of academics first is definitely something Coach Mullen preaches,” said Burnett.

As a redshirt freshman, Burnett spent his season on the sideline cheering the team on; however, practices were a learning experience.

“I learned so much this year,” said Burnett. Traveling with the team to a bowl game was a special treat.

“The whole trip was a blast and a great bowl experience. Winning the game was definitely the best part,” said Burnett. “We went to a Tampa Bay Lightning hockey game, we got to go to Busch Gardens for an afternoon and on Christmas Eve we had a beach bash.”

Both bowl teams also participated in “Fill the Bowl” providing 20,000 bags of food for local children.

Burnett is looking forward to the 2017 season.

“I’m excited to learn more. I want to continue to improve every day and be the best player possible so I can help my team,” said Burnett.

From old school to new school

By CONNIE NOLEN / Community Columnist “Wow! Look at the new school,” my daughter exclaimed as we drove past Pelham Park... read more