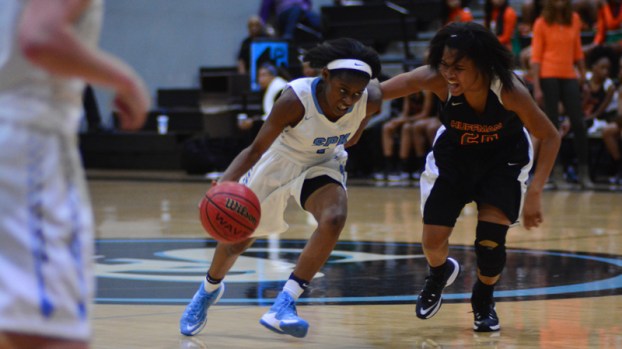 The victory improves the Jaguars to 13-7 overall and 2-0 in area play.

Eleven of Spain Park’s 22 points in the first period were scored by Holt, and the hosts held a 22-11 lead.

Huffman’s Ariel Jenkins sank a three-pointer to cut the deficit to 32-27 with 45 seconds remaining in the second period, but Holt answered back with a three of her own and snuck in another field goal as time expired to extend the SPHS lead to 37-27 at halftime.

The Jaguars grew their edge to 52-38 after three periods of play.

Barrett Herring opened the scoring in the final period with a rebound and putback, and Holt drained a three moments later to make it 57-41.

Huffman scored some baskets in transition by outrunning Spain Park defenders, and started fouling with 2 minutes left on the clock, but it was not enough to catch the Jaguars.

Ahrielle Parks was Spain Park’s next leading scorer after Holt with 13 points, while Herring and Christen Rushing also scored in double figures with 10 points each.

Huffman’s Jayla Crawford was the game’s leading scorer with 31 points but did not have much help as her teammates combined for 26 points.

Spain Park is scheduled to visit Midfield on Monday, Jan. 16, and then resume area play with a visit to Mountain Brook on Tuesday, Jan. 17.

By ALEC ETHEREDGE | Sports Editor COLUMBIANA – Arena professional football is on its way to Columbiana as the Alabama... read more