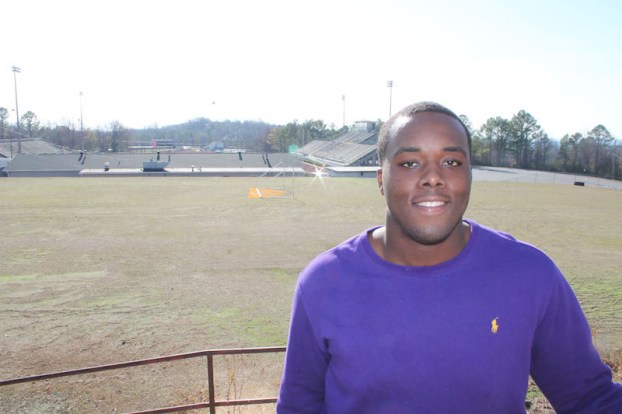 “What a snowstorm! They can’t see the field,” my husband exclaimed.

Watching UNA’s fight for the NCAA Division II Football National Championship that Pelham alum Jordan Brooks was playing in, we agonized over the cold that Lewis Brooks and the entire family were enduring. An alum myself, I’d followed the team more closely since Jordan Brooks transferred to UNA.

After a valiant effort, the Lions finished second in the nation. Catching up with Jordan Brooks recently, we remembered together the scene from the novel, “Tuesdays with Morrie,” when Morrie surmises that second place is very respectable.

“I had to reflect on that,” Jordan Brooks said. “After we’d returned home, I was able to look back at our season and realize what we’d accomplished. We had a phenomenal year.”

Showing up in UNA purple and gold, Brooks looks older than the playground gentleman giant. Seven years older than my younger daughter, Brooks was her playground hero. She would call for Jordan Brooks to lift her onto the highest bars—insisting on him only. The most patient 10-year-old ever kept my preschooler happy and safe.

“At UNA, the community loves the students,” Brooks said, “and being part of that community is a great experience. The school was perfect for me. UNA has a big school feel without being overwhelming—and it’s close enough to make the drive home.”

Brooks said that UNA Coach Bobby Wallace created a winning culture based on respect. Wallace announced his retirement this week.

“Coach Wallace built a great program,” Brooks said. “I was blessed to be part of this team.”

Brooks completes his sports management degree in August of 2017 and will pursue his master’s degree.  Researching his options for graduate school, Brooks is committed to maintaining a purposeful connection to sports.

Jordan Brooks remains a first-class gentleman with a plan for success.

Meaning of Christmas shines in ‘Jesus the Christ’

By CONNIE NOLEN / Community Columnist “Dancing briefly in church tomorrow if you’re looking for something to do—shows at 3... read more