Panthers move to 2-0 in area play 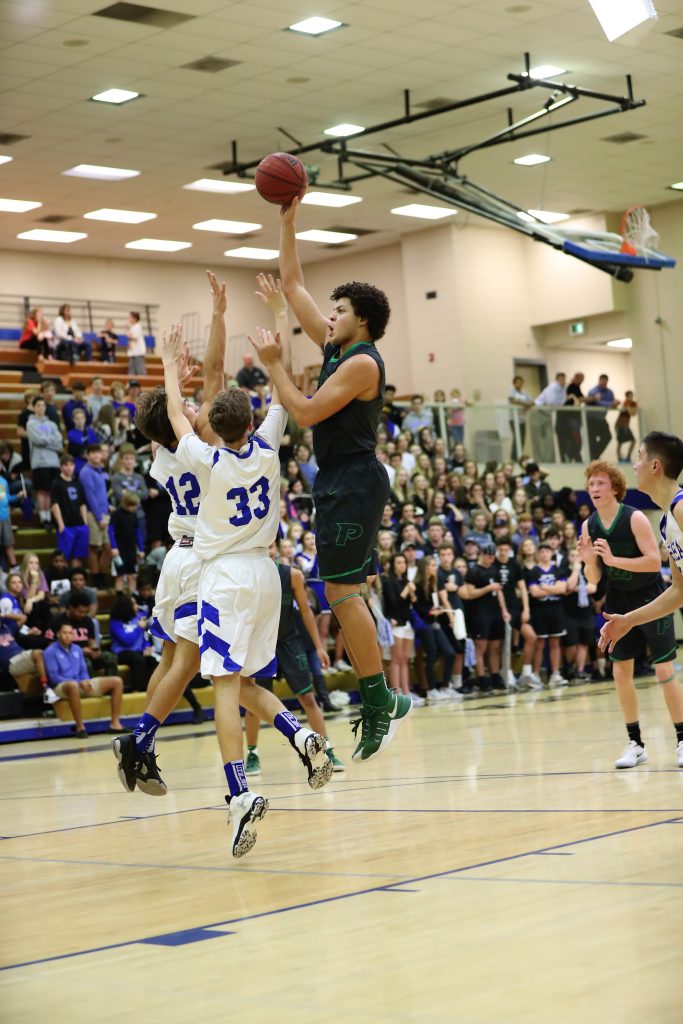 Alex Reese goes up for a hook shot over the outstretched arms of two defenders. (For the Reporter/Cari Dean)

CHELSEA – On Wednesday, Jan. 11, it was determined that three teams from Class 6A Area 8 were ranked in the top 10 of the 6A basketball rankings. On Fiday, Jan. 13, two of those teams faced off against each other as No. 3 Pelham traveled to take on No. 10 Chelsea in a matchup with huge implications.

The game featured a lot of questionable officiating as each coach got a technical foul trying to stand up for their guys, both of which were well warranted as Alabama signee and Pelham star Alex Reese and Chelsea senior leader Joseph Lanzi, both spent the night dealing with foul trouble, which took away from the game.

In the end, the Panthers were too much as Chelsea struggled to answer a couple of Pelham’s runs and fell 53-38 in the game. After taking down Helena on the road earlier in the week, this meant Pelham has now started the season with a win over each of their area rivals and both on the road in hostile environments.

“This has been a very important start for the team because both area wins have come on the road,” head coach Joel Floyd said. “In a three team area the regular season means even more.”

With Reese sitting on the bench to start the second, Pelham junior Justin Allison took over the scoring duties. Allison came out and hit a three on the Panthers first possession of the quarter and had seven of their first nine points in the quarter. Pelham eventually grabbed a 12-point 27-15 lead, but Chelsea answered the run and climbed right back into the game as they ended the quarter on an 8-0 run and only trailed 27-23 heading into the half.

“It’s been great for us over the past couple of weeks to have these other guys stepping up,” Floyd said. “We faced some adversity in the past few games with injuries, but they have overcome that because others are stepping up.”

After not scoring in the second, Reese came back in the third and started the quarter with an and-one to put the Panthers up 30-23, which sparked a run. Pelham was able to hold Chelsea to just four points in the quarter as they went on an 11-4 run to go up 38-27 with one quarter of play remaining.

Just like the first quarter, Reese had a strong fourth posting nine of his game-high 25 points. Several of his offensive boards in the final frame came off of offensive rebounds as Chelsea head coach Nicholas Baumbaugh begged his team to box out.

Reese led all scorers with 25 points in the game, while Allison added 14 for the Panthers. Derrick Bush also put up nine points in the winning effort. Lanzi led Chelsea with 13 points, while Jonah Moore had his best game of the season with 11 points, all in the first half.

Pelham now has wins over the No. 10 and No. 6 team’s in the last week, both in their area, and now have the upper hand at the Area 8 regular season crown.

“It’s been significant for us that we have had so many guys get the opportunity to play,” Floyd said. “It has shaped us into a well-rounded team.”